To Cupcake, From Sugarplum 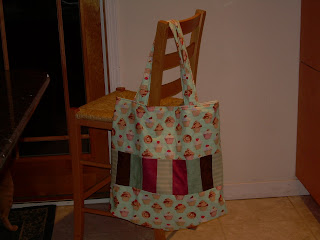 There's a young woman at work who's taken a liking to me. And that's just splendid because I've taken a similar liking to her! Despite a vast age difference (I could be her mother), we get along famously. She takes pleasure in my broken Spanish; I take joy in her gorgeous daughters. We're quite a pair.

Out of the blue one day she called me "Sugarplum." And for no reason at all, I responded, "Okay, Cupcake." The names stuck. Other people on the campus raise a quizzical eyebrow. Neither of us tries to explain. How could we?

The week after Christmas, she surprised me at my desk with a little gift. It was a bread mix from William Sonoma, and it was called "Sugarplum Loaf." I made in the very next weekend and it was scrumptious. Unbeknownst to my friend, I'd picked up some fabric with her name on it. I didn't have time to make my project until today. I used scraps of fabrics on hand for the trim and another piece of left-over from another project for the lining. It called for Pellon interfacing and I didn't have any, so I used a light batt. It took me only a few hours to make it and I had such a good time.

For once, I don't mind that tomorrow is Monday!

Unknown said…
That bag is scrumptious! I know she will be thrilled!

You are so very sweet.

Sugarplum does fit you!