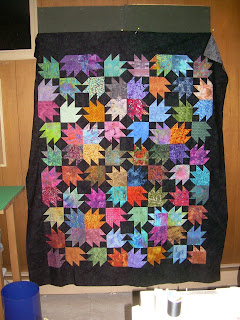 My bear tracks in batiks have been made into a flimsy! And it is called Makin' Tracks.

I had spent so much time cleaning and organizing my sewing studio and when I unearthed the blocks that were made, I decided to get right back to them. I needed an additional six blocks and went into my big Rubbermaid tub of batiks and selected twenty-four different pieces and cut. I was particularly delighted that the black was right there with the blocks and that there was enough of it to finish blocks and make the border.

I had it all finished and was ready to take the picture when I discovered that one row was in upside down. So out came the seam ripper and all in good time, it was out and back in. Problem may have been that I was sewing it on Sunday. My mother used to say that if we did any sewing on a Sunday, we'd have to pull all of the stitches out with our noses! (Just precisely how that was to be accomplished was and remains unclear. I'm just reporting."

I don't believe Makin' Tracks wants or needs anything more. I'll think about the binding when it's ready for that.

Gari in AL said…
What a lucky find. Sometimes when we find the old things we had been working on, they look so much better than they did when we put them away. It looks great!
Wednesday, January 21, 2009 8:47:00 PM

Laurie said…
Brights and black! This one is right up my alley!