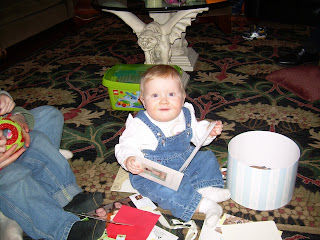 It's been a splendid weekend thus far, despite the cold (which now is not quite so bad as it was).

Friday night we attended a spaghetti supper benefit for someone in our community. The meal was prepared by students from the vo-tech culinary arts program and was absolutely delicious. We enjoyed being part of a community effort to help someone down on his luck.

Then last night Sherry and her family and Honna came to dinner. I fixed a casserole with a Mexican flavor and Sherry made a delicious cake (all the more delicious because we don't often have baked goods any more). The kids were wonderful. Sam loves the new train layout that Joe has set up, and Caroline was amused for a long time by a hatbox full of old cards and photographs. 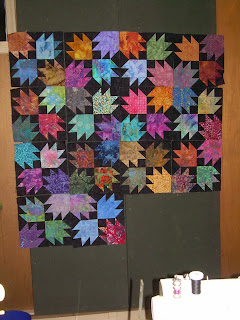 I spent several hours over the past two days cleaning and organizing my sewing studio. It had been so bad that I [jokingly?] wondered if the Board of Health was going to come and shut me down!

In the process, I unearthed a project from several years ago. It was one of the monthly group efforts. I'd sent out pieces of a really pretty black-on-black (BOB?) fabric and asked the members to each use four different batiks and make me a Bear Tracks block. I was delighted with what came in and then lost track of them.

When I found them today I was happy and put them right up on the design wall so I wouldn't lose them again. Don't you just love the secondary pattern formed by the blacks?

It was obvious that six more blocks are needed, so I lost no time in getting started. I had plenty of the BOB and a big Rubbermaid tub of batik scraps. Bear Tracks in Batik could be my second flimsy finish of '09!

And there's still another 1/3 of the weekend to go.

You're so right, friend. Life is good!

Lorraine said…
good that you tracked down the bear tracks......the blocks look wonderful and isn't it nice to have an almost finished quilt to finish.....great sense of satisfaction - with little effort because you all the effort was put in ages ago!

quiltmom anna said…
Nancy,
I love the gorgeous batik on black bearspaw quilt. It really is inspiring and what a great quilt to find among your UFOS. It is wonderful that you are able to finish it up.
Thanks for sharing..
Have a great week, Nancy!
Regards,
Anna
Sunday, January 18, 2009 11:53:00 PM

Mrs. Goodneedle said…
Indeed it is, my friend!!

I will have to remember the greetiing cards for Mason, something as simple as that can keep little ones mesmerized for the longest time. I still have a stack left from Christmas that this Nana will hang on to.