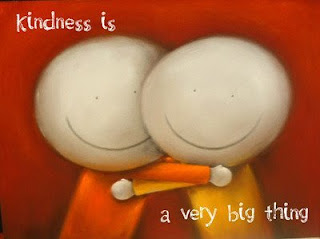 The recent past weeks have been clouded by some unpleasantness with a fellow church member. Always arrogant and imperious, he's become more so since taking on a position of some responsibility in the congregation. He knows everything and really can't bring himself to even acknowledge that there might be another point of view (albeit a mistaken one, of course) apart from his own. I've thought about Luther's position that has helped me though some other interpersonal difficulties in the past, that of putting the best possible face on our neighbor's failings.

I was thinking today about a book that Honna wanted me to read a few months back. It was about sociopaths. I glanced through it and told her I just didn't want to read it; I didn't want to fill my head with unpleasantness and perhaps start looking for the pathology in people I meet. This morning I had a moment of regret at rejecting the book; if I were able to believe that this man from church has a condition of some sort, a mental illness that he can't help that makes him so unpleasant to be around, I think I could handle it better.

I guess because of what's been going on with this man, I've been supersensitive to other unkindnesses. A couple of routine statements have leaped out in conversations.

Someone I know who is amazingly thoughtful and considerate of others has been saying "You think?" when another person says something that is obvious. I cringed when I heard it directed at someone and thought how hurt I'd be if it had been me.

Another question that causes a visceral reaction is, "What part of [whatever] don't you understand?" This response is such a put-down, leaving the hearer with nothing at all to say. I think if anyone ever said that to me, I'd prolly just walk away, never to return.

Now, of course, I'm wondering what sorts of reflexive unkind things I say and what unkind behaviors I'm exhibiting. I know I'm impatient at having to repeat things, all the while mindful that my own hearing is not as acute as it once was. I guess I wish there were some sort of a magic mirror I could employ for a week or so that would flash a light when I'm mindlessly unkind.

But there isn't. So I just need to slow down a little bit and be more tuned in to my own behavior and language.

And as for the guy at church, I guess the only thing to do is pray for him. He must be terribly insecure and probably is lonely. And that is a sad thing.

Barb said…
Yes Nancy as Christians we are called upon to pray for those that are difficult to deal with! Personally I pray, but at the same time I try NOT to put myself in the position of needing to deal with the person, yep tough I know!

I too take the position of striving to be more positive and to reflect what God would have us do! WWJD!

Karen said…
Thanks for writing this, it is a good reminder to me to always use kindness in my words.

Unknown said…
What is truly inside our heart is relected in what comes out of it...thanks for posting this...we all may be needing to be reminded of this thought.

Leslie said…
What a thoughtful post. I recently passed by a magazine article on Hoarding. The recap quotes showed me it went into pathological hoarding, not stash building! I didn't want to explore the dark side... And I agree with you, I find a large number of difficult people; those that are arrogant, controlling or seem self absorbed when inter-acting with the world are really unhappy with themselves and insecure. When I think of them that way, it helps me have patience or compassion.
Sunday, January 04, 2009 10:17:00 PM

Unknown said…
Sadly it seems there are people in most organisations be it paid or voluntary who have that need to be the expert and seem unable to see anything from an alternate angle - I'm afraid they often bring out the very worst in me as I struggle with tolerance in that situation. Hard to be charitable when someone is so unreceptive but the one good thing is it does make you re-evaluate your own words and how they affect others
Monday, January 05, 2009 3:10:00 AM

LoieJ said…
Yes, the reevaluation is good and useful.

My mother used to (she doesn't talk much anymore) have a response to things ("Really?") that galled me so often, it was like she wasn't accepting what I was saying, but it was just verbal noise, I guess. But your acquaintances are being sarcastic, plain and simple. My husband won't put up with one ounce of sarcasm; he says it is always down putting and never funny. Perhaps your acquaintances have never been told that by someone they respect, or they have had to put up with it frequently in their own lives.

I know what you mean about wondering about the mental/emotional condition of a person in one's life. There is a woman at church who I wasn't warm to after several things happened. She is in her mid 50's. Now we all realize that she has lost some of her marbles. She can't work nor stay alone. Really sad. I'm with her alot and I'm working on being kind and helpful.
Monday, January 05, 2009 9:45:00 AM

Guenveur in Kent said…
And then there's the person who takes offense at the most innocent comments:
A. "Good morning."
B. "What's that supposed to mean?"
Human beans are quirky and communication is not always easy.
And then, some people are just plain mean.
Maybe an intervention with this person at church would help you, if not him.If he is causing dissension in the group he needs to be confronted. Is everyone intimidated? The minister? Even Christ didn't let people get away with crap.
Monday, January 05, 2009 10:26:00 AM

Exuberantcolor/Wanda S Hanson said…
It sounds kind of like a bully mentality, my way or no way. Some people express their power that way when in reality they are just insecure. They are hard to deal with for sure.

Yes praying for him and for your own understanding of his manner is about all you can do.

I'm with you on the things I say too. I don't mean to be unkind ever but sometimes it is taken the wrong way and I wish I had used a better choice of words. I would like a light flashing too, preferrably before I say or do the unkind thing.
Monday, January 05, 2009 5:43:00 PM

Laurie said…
O wad some Power the giftie gie us
To see oursels as ithers see us!
It wad frae monie a blunder free us,
An' foolish notion:

Or, for those who don't speak Scots,

O would some Power the gift to give us
To see ourselves as others see us!
It would from many a blunder free us,
And foolish notion:
Tuesday, January 06, 2009 1:07:00 AM

Kim said…
Unfortunately, too, we always hear our own words the way they're intended, which isn't always the way they sound to other people. You're probably right about this other person being insecure and lonely--probably unhappy too. I find the happier I am, the nicer I am, and I'm sure it's the same for all of us.

I'm not very tolerant of difficult people, and sometimes I wonder if that's a failing of mine, or just good common sense. I'm not confrontational, but I just tend to ignore, avoid, or eliminate them from my life. Being in a position where you HAVE to deal with someone like that is hard, because it's not just the time spent WITH the person, but the affect he or she has on your thoughts and mood when they aren't even around!
Tuesday, January 06, 2009 3:06:00 AM

Mrs. Goodneedle said…
I've walked on your shoes, my friend. This situation of yours, in fact, has dredged up some memories of a situation that I'd just as soon forget. Then I remembered the one person I turned to for objectivity... YOU! You helped me more than you'll ever know in dealing with a difficult personality. Thank you for that. I am praying for you right now.
Tuesday, January 06, 2009 8:23:00 AM