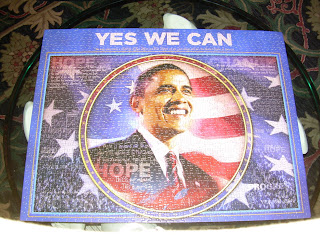 We hadn't done a jigsaw puzzle in a long time. Like about eight or nine years. I usually think of them as a late August kind of activity -- I remember when the kids were little and summer had gone on just a little bit too long and although they didn't realize it, they were eager to get back to school and routine. That was the time to get out the Monopoly game and when interest in that paled, to get a new jigsaw puzzle. Five hundred pieces was the limit then.

But there's no reason a puzzle can't be a dead-of-winter activity, too. In front of the fireplace. When it is too cold to go anywhere. And adults can tackle a 750 piece puzzle without being daunted.

Since the Inauguration, there hasn't been a whole lot of sewing (or anything else) happening at home. Because on the day before the Inauguration, when I was at the bookstore seeking an orchid resource as a birthday gift for Himself, I saw a 1000-piecer with a most timely theme. Never before had such an undertaking been undertaken!

Rather foolishly, we put it on the coffee table. Where we had to stoop and bend to do the work.

Himself has been just a bit obsessed, coming to bed at all hours, forsaking other activities, moving lamps around to get enough light. I've been less committed, but certainly done my part. Turbo came over one night for some CW scraps and when she saw what we were up to, she just shook her head. Just imagine the sewing that could have been done!

Last night, cramped and with backaches, we went to bed leaving about 30 pieces on the table, much to our dismay. We'd hoped to finish before morning -- Octavia was due to come and clean. But we couldn't do it. The puzzle wasn't done. But we were.

Had our usual weekday juice/cereal/coffee/fruit this morning and then, five minutes before I was to leave for work, some magnet or another drew me back into the living room. In short order, my partner joined me. Five minutes and thirty pieces. Surely this could be done with two of us working.

I was late to work.

Juliann in WA said…
This is too funny - our daughter it a huge puzzle fan and when she moved out of the house I let her take a small side table that was my grandmother's thinking it would be her dining table but no, she wanted a puzzle table that could be left going at all times - and it has been!
Friday, January 30, 2009 9:19:00 AM

Laurie said…
My daughter got me a 750 piece Disney puzzle for Christmas. (Backstory being that I fell in love with my husband in Disneyland, in line for the old submarine ride, because he was acting so adorably dorky -- an entirely different side to him. My kids are all Disney babies; we've probably been there at least half a dozen times as a family.)

My usual attentiona span limit is 500 pieces, but this was a good one, with a lot of obvious color and form changes, so not that hard. (I absolutely hate the ones where all pieces are a similar color. Life is too short.)

She and I were up till WAY past my bedtime finishing it, but it was a lot of fun -- both doing the puzzle and doing it with HER on her college break.

Oh, also, you might like this video. It's trying to encourage the underperforming France National Football (soccer) Team with a little dose of Barack. (I don't think it's coincidence that the majority of players on the team descend from African immigrants.) The beginning reads:

Laurie said…
Arg. Apparently Blogger no longer does automatic links in comments? Let's see if it works with the HTML:

Lorraine said…
Oh Nancy - I can so identify with that!! You probably saw the puzzle I did over the Christmas break....I too went to bed at all hours with backache and even shifted lamps to get better light!! Obsessed - oh yes I was!! Great jigsaw...!...I also went to bed with just a few pieces left on the table knowing I was "done"......but was still on holidays so got it finished without being late for work...! Would be good to have a jigsaw on the go for these really hot days!
Friday, January 30, 2009 9:45:00 PM

The Naturalist's Daughter said…
It looks great! Sounds like those books I can't put down. You got truly hooked. A great way to spend time.

Nicole said…
I haven't had a puzzle in years. When my folks had a beach house, we made sure we always took a puzzle with us when we went for vacation. It was such a cozy and companionable activity. I am going to go out and find a good one!
Sunday, February 01, 2009 12:09:00 PM