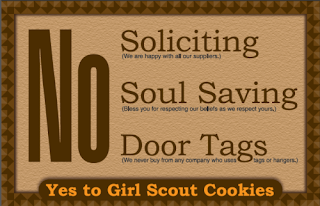 The other night, just as Himself was scheduled to go out to a client meeting, the doorbell rang. We both went to answer, with Blackberry barking a terrible warning.

It was a nicely dressed, clean and handsome young man who was "finishing up some work in the neighborhood" and noticed that we might need to have some work done vis-a-vis our windows (?)

Let the record show that all of our windows are interchangeable storm/screen, in excellent condition.

We thanked him for coming and said we were not interested. He wanted to give us literature in case we change our minds. We said no, but thank you. He then persisted, wanting to engage us in conversation about the age of the homes in the neighborhood. We became less cordial, eventually having to just close the door. How rude of us!

I know door-to-door soliciting is a hard job; people doing it have to school themselves for ongoing rejection.

But, y'know, if we were thinking about replacing our windows, we would go to a couple of local window people and make an educated decision. We wouldn't sit around the house, waiting for a total stranger to come to sell us windows we know nothing about.

The guy with the clipboard who wants to talk about clean water hasn't been here yet this summer. He's usually been here and chased away by now. The driveway refinisher was here not long ago, oblivious to the beautiful driveway refinishing we had done last summer.

We were brought up to be polite. Himself does a better job of it than I do in these circumstances. It doesn't help that these people usually come during dinner. (Well, of course, that's the only time they can. Most people are out at work during the day and they certainly can't ring doorbells after dark. But still.) The solicitors have apparently been trained to take up as much of our time as they can; perhaps that is believed to increase the likelihood of a transaction.

But it is intrusive. They interrupt what we are doing for something we do not want. Coming into autumn, it's just a matter of time before it is the candidates dingdonging. Our township police department provides free door stickers repelling door-to-door solicitors. We don't have one. Yet. If I thought I could get one like the one in the picture, I prolly would. Because, you know, I wouldn't want the neighborhood children to feel like they couldn't ring -- I'm a firm believer in supporting the Scouts, the Band, the football team, all of those things.

While I was typing this the phone rang. It was the third person today wanting to either sell me something, beg for money for an unheard-of charity that is likely paying the caller more than I would give if I were going to give, or is making a "courtesy call" that I never stuck around to hear about. It's times like these that I become sympathetic to my husband's wish to "move out in the woods, where there's nobody around to bother me."

Janet O. said…
I have long had a policy of not buying from those knocking at my door (other than the neighborhood children, as you point out).
If I need to shop from home I will do it with a catalog or the internet, when I want to, and from a company I choose.
Friday, September 04, 2015 2:40:00 AM

In the last year, we've been annoyed repeatedly by folks calling about our computers - as if they know a thing about our computers. I've said we're on the Do Not Call list and "take this number off your contact list" until my patience is gone. Finally one man said we had registered a Windows product and that's why he was calling. Nope, we've run Linux for a decade (free) and have no Windows at all. Grrrrrrrrrr! I am no longer so polite to this bunch but I hang up on them rather than say anything ugly (a 1950s Southern term for bad behavior or speech).

Nicole said…
The minute I turned 60 I started getting calls from people wanting to sell me those bathtubs that have a door so you can step in instead of stepping over the side. Seriously? I think can still get in and out of my bathtub thank you very much. I also hate those solicitors outside the grocery store who want a signature for something. Recently I tried to pass by one persistent man who said "Please lady, I get $1.50 for every signature". Thanks for telling me how much you believe in whatever your cause is.
Friday, September 04, 2015 9:38:00 AM

Cathy Skelton said…
And another Amen. I have taken to not answering my cell phone (we don't have a landline any more) if the number is not in my area code. I have all the family numbers listed on the phone, so I am not too worried about missing their calls. I have also taken to checking an online reverse phone # lookup to confirm that some calls are of no interest. I am contemplating the technique of answering the phone and then setting it down without listening to it and let whoever has called natter on until they realize no one is there. I will probably reserve that for repeat calls, though. We also just don't answer our front door if we see someone we don't recognize at the door. I find I have less & less patience for this nonsense as I get older.
Friday, September 04, 2015 11:37:00 AM

Mrs. Goodneedle said…
I remember a few years back when a man came to our door and rang the doorbell at 8PM. He was driving a semi-tractor trailer which was parked out on the street in front of our house, still running, with headlights blazing. "I have a truckload full of furniture" he explained, "and I can't return until I sell it all." I was shocked and puzzled at the same time, I could see some of our neighbors around, and in, the back of the truck. One of my neighbors bought a lamp. As you might imagine, it was cash only. I wasn't one bit suspicious. ;) No, I don't buy anything from door-to-door salesmen, like you, only from scouts and local school children's fundraisers.

LoieJ said…
My daughter did very well at door to door sales of children's books for three summers. The books weren't cheap, but good quality. She won a few trips through her sales. Her training included NOT droning on and on because she would move on to the next residence. Taking rejection as just part of the work. I could never do that work!
Friday, September 04, 2015 6:52:00 PM

Sherrill said…
Have you not registered your phone for the DO NOT Call registry? If someone does make it through, I tell them "I'm on the do not call registry, take me off your list" and that's usually the end of it.

Chris Johnson said…
Good post. In the Lutheran tradition you could print it and post it on your door. I'm not jesting.
Saturday, September 05, 2015 5:13:00 PM

Karla said…
Makes my blood go cold when a solicitor comes a calling. I feel so guilty being unhospitable. I tell the charity people that I pick my own charities, not the other way around. I tell the sales people that I would love to have a new _____. But only if the give it to me for free. If I am paying I research and choose and then try to go local. The door shuts each and every time. The hard ones are the ones saying they need to sell a certain amount of newspapers to get some sort of money for school.

In this day and age we do need to be ever so mindful. A patient of ours daughter just was scammed out of $90,000. Working at the Victim Service Unit at the local police has opened my eyes to how many scams are out there. And how many fall for them. We must all learn that we must be the ones to initiate any type of business.