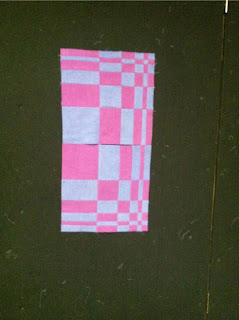 I realized that I don't post a lot on my blog about activities at Philadelphia Modern Quilt Guild. I joined this group a few years back and I've noticed that since then, my quilting has evolved. I have become much scrappier, and have developed a certain fondness passion for Kaffe Collective and other modern designers.

One of our activities during the past year has been a Bee that Kathy organized. My group made a lot of different blocks, and it was fun to stretch -- try techniques and colors that I wouldn't ordinarily choose.

Kathy was Queen Bee this month and asked for a pair of Fibonacci blocks in two contrasting solids. These were a lot of fun to make. 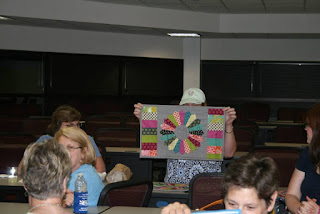 A one-time activity at Guild this summer was a Brown Bag Swap that I organized.

Participants brought a brown paper bag with scraps from one project. The bags were swapped out and each participant then had two months to make something for the owner of the scraps, adding fabric as necessary.

I drew Tamsin's scraps and, adding some Pewter Kona, made her a set of four Dresden Plate placemats. The person who had my name needed a little longer to complete her project.

Our guild president, I believe, neither sleeps nor eats, but instead sews all the time. She is a fountain of ideas for swaps and projects. She organized a block raffle where a block was specified and everyone who wanted to participate made one. Then a name was drawn and one participant got to take all of them home.

The first block was a "Polaroid." We cut a six-inch square for the "picture," 1-1/2" strips for the sides and top borders and a 3" strip for the bottom border, then bordered the whole thing in a color cut at 3". What a great quilt they will make for someone!

Barbara Anne said…
What wonderful quilters you're surrounded by at guild and at bee meetings and what fun, innovative projects!

What wonderful placemats Tamsin now has thanks to your skills and imagination!

Did you find the Fibonacci blocks difficult to make?

The Brown Bag project at my guild in TX was different. Each person who wanted to participate make a center no larger than 80" around, then put that in a paper grocery bag and brought it to the meeting. Inside the bag could be up to 5 instructions (like "no stark white") and any fabrics the 3 quilters who would host the bag could use - or not. The bags were swapped again at the following two meetings so each center came back with three borders. Often when the bordered quilts were revealed, the quilt had changed so much that the person didn't recognize her center block! What fun!

Janet O. said…
Some very clever swap ideas going on there. With your work, and all of the wonderful baby quilts you make, how do you find time to do the swaps? I think YOU neither eat nor sleep, my friend!
Thursday, September 10, 2015 11:00:00 AM