We got up early on Wednesday morning and left Hotel Alexandra right on time. Off we went to the central train station in downtown Copenhagen. I was standing in line at the information booth when a young woman asked if she could get ahead of me -- the man in the booth was her colleague and she needed to ask him for a key. Of course I let her in, and while we stood there, she was kind enough to explain how to find our train. Without her help, we wouldn't have managed to get to the train on time. And after the Kalundborg incident, we were a wee bit anxious that everything go smoothly this timie.

Our track was #26 and the secret was to go down the steps for tracks #5 and 6, walk to the very end of the platform (seeing signs that said "Track 26 -- 10 minute walk") and take an elevator up one level, walk about six steps, take a second elevator down one level, and there was Track 26! It was almost like trying to find Platform 9-3/4!

The train ride was comfortable, and the train was nearly full. As we crossed the border into Sweden, once again Joe said, "Welcome home." 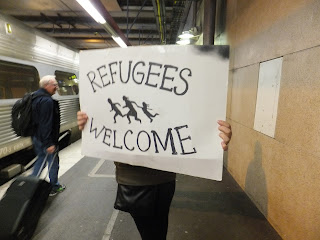 A little more than five hours of beautiful countryside later, we arrived in Stockholm where as we got off the train, we were greeted by this person. Sweden had just issued a statement of welcome to refugees, and this girl was the personification. Her companion had plastic bags of groceries to give to refugees.

(You can see Himself with his backpack and carry-on. Yes, we did three weeks away with those two pieces of luggage each.)

Not being refugees, we went to Scandic Gamla Stan, where we'd stayed before. My replacement credit card was waiting for me at Reception! 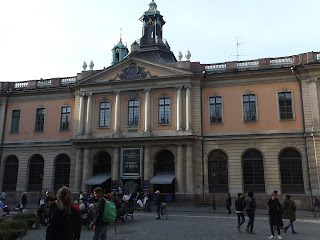 We settled in and then walked up to the Nobel Museum where we spent about an hour and a half. It is a wonderful museum and we not only learned a lot, but emerged hopeful and optimistic about the future of humanity! I learned about the nomination-selection-announcement process, and was intrigued that nominees who are finalists and who are not selected to receive the prize remain secret for fifty years.

This year's announcements are just a couple of weeks away, so excitement is building. We learned about the announcement process, which happens on the second floor of the Museum.

There were photos of all of the winners, explaining why they were chosen.  There was a section of artifacts -- the microscope used when a particular discovery was made, the original draft of a manuscript, the hat one was wearing when he learned he had won the prize. On our previous trip we had visited the section on the life of Alfred Nobel, so we didn't return this time, but we did very much like seeing his Will, where the terms of the prize were set out. 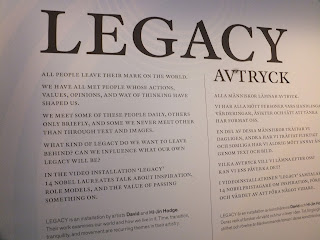 It is the kind of place that makes one think. A question on the wall was "What will your legacy be?" This was in the area where the various winners' accomplishments were shown. In another area there were video vignettes of winners sharing their hopes for the future. The question then, "What are your hopes for the future?" 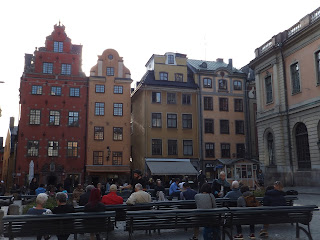 It wasn't quite time for dinner, so we decided to go to one of the places on the square and have a drink. The couple at the next table turned out to be locals, shop owners, in fact, and just the nicest people. We had a lovely time talking with them, and looked forward to visiting their shop in the next day or two.

Dinner was at Traditions, a chic restaurant with a traditional Swedish menu. Meatballs in brown gravy with lingonberries were my choice, while Joe tried the potato dumplings. Dessert was a chocolate mousse sort of creation settling in cloudberry sauce. Heavenly! We got to talking with the couple at the next table; turned out to be a Belgian woman on holiday, traveling with her university-age son. They were so pleasant. I told her that we'd not been to Belgium (yet) but we were filled with admiration for Dirk Brosse, and she said that he was beloved in his home country. 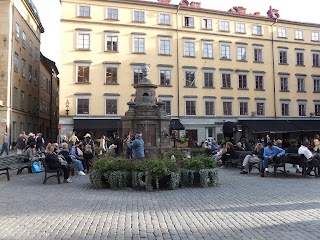 Barbara Anne said…
Marvelous story and I wonder how anyone can find track 26 on their own from that ticket booth??! Track 9 3/4, indeed! :)

I believe my little legacy will be in three areas:
!) thru the kind, caring, thinking, courteous sons we've raised.
2) thru the care and communication I had with my patients and their families during stressful times for them.
3) thru my quilts that speak of my individual freedom of creativity and friendship and that are scattered here and there in the world.

My hopes for the future is that all citizens here will have the vote and be heard, that the selfish and greedy will be thwarted in their grabs for power, that peace and prosperity will overtake the planet, and that we'll each be angels to each other and to this planet.

The story of how the city of Aslund was so beautifully rebuilt in 1904 really spoke to me. Imagine that!