The Oslo Report: Part One

We arrived in Oslo too late to do very much at all. We were tired from a long -- but interesting -- car ride. The rain that had been with us on-and-off since our arrival in Norway was still with us and a little more intense than it had been. Dropping the car off at the airport and taking the train into central Oslo was easier than either of us anticipated. We pulled our suitcases the six-or-so blocks from the station to our hotel, did some minimal unpacking, and went out to a local restaurant for some reindeer cakes.

Thursday morning Joe wanted to go back to some museums we'd visited on our previous stay in Oslo and I had it in my mind that I needed to go see "The Scream." Little did I know . . . .

So we split up. I walked 5080 steps to the Munch Museum where a very special exhibit -- that I hadn't even known about -- was being held for just another couple of days. There was a long line to get in, but people were pleasant and it moved quickly. The exhibit was terrific. A group of Van Gogh's paintings had been installed along with those by Edvard Munch. Side-by-side I saw self portraits, portraits of old men, and other pairings, until at last I came to the two Starry Nights. 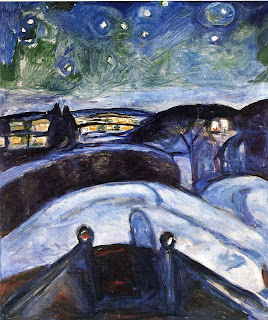 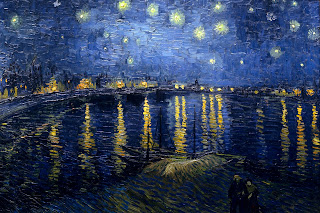 It was hard to move away from seeing these two, side-by-side. But The Scream beckoned . . . . 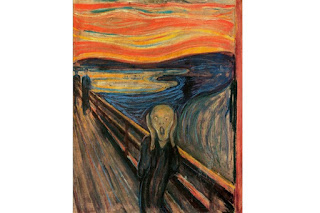 It was smaller than I'd anticipated and the colors less bright, and somehow that added to the terror of the piece. I stood there for a long time. 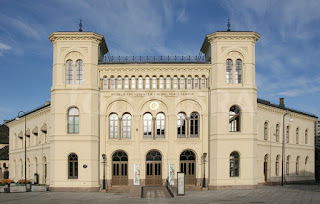 I was so proud to figure out how to take the subway "home"! After a short break, out I went again to do some shopping at Gudrun Sjoden where I found some lovely things to enhance my meager autumn wardrobe. It was raining again when I emerged, and I'd left my umbrella at the hotel, so I tried to dart between the drops but was still pretty wet on my arrival. I put my things away, changed to dry clothes, and went over to meet Joe at the Nobel Peace Museum.

And when I got there, he was coming in the door at the same time! I'd not had lunch so we went into the cafe and that was where I discovered that the dear little travel wallet my friend Bobbi had made for me wasn't in my purse. I couldn't help thinking of The Scream, but we convinced ourselves that it was in the hotel where I'd done some rearranging of my things.

The museum was free that day because the rotating exhibit was in process of being replaced. So we went and enjoyed the permanent one. 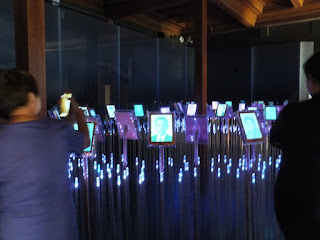 This isn't a particularly good photo (no flash permitted). It shows photographs of each and every Peace Prize recipient, with the year of the award and the reason why it was given.

Every now and again the voice of one of the recipients would emerge for us all to hear.

Another room was dedicated to Martin Luther King, Jr., and showed the process by which nominations are received and a selection made. I liked this section the best.

I was intrigued to learn that once a selection has been made for a particular year's recipient, the names of other nominees are sealed for 50 years before being revealed. 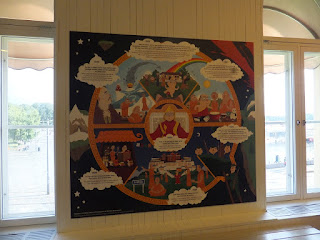 Another room was devoted to The Dalai Lama, telling his life story and his accomplishments.

This was an interactive room, with a blackboard and colored chalk where people were urged to write their own messages of peace.

I was able to translate one childish handwriting in Spanish that said, "I wish that all the children would be happy." 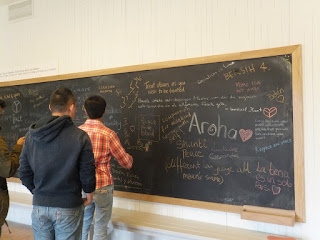 When I came back to the hotel, alas, my wallet was not to be found. I trekked back to Gudrun, but it wasn't there either. I spent time on the telephone with my two credit cards and as of that time, no one had tried to use either one. Now they are canceled; driver's license, health cards, etc., will be minor hassles to deal with when we get home. My twenty-five American dollars -- well, I'm just happy it wasn't more than that. 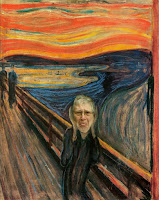 I felt stupid, clumsy, careless, and worried that Joe was thinking the same things of me, but he just said, "I feel sorry for you. These things happen." Fortunately, he has credit cards and a debit card that aren't connected to mine.

Karla said…
Wow, your trip sounds fantastic. I am so thrilled that you have taken the time to write about it for us! I am sorry about the speed bump in your trip, but that is just an inconvenient fix. Hope the head cold is resolving it's self with both of you.
Hugs my friend.
Monday, September 21, 2015 6:16:00 AM

Janet O. said…
I'm trying to catch up with your posts about your trip, since I have been away on one. Haven't commented until now that I reached this post. What a time you are having, and such places you have seen!
I would have been entranced by the two Starry Night paintings.
How frustrating to have your wallet go missing, but it sounds like you caught it in time.
Love learning some of what you learned along the way. Fascinating stuff.
Monday, September 21, 2015 11:07:00 AM

Barbara Anne said…
How delightful to see those priceless REAL paintings that you've known of for decades! Bliss!

All sounds so wonderful, up until you discovered you'd lost, misplaced, or otherwise separated yourself from your wallet. I'm glad it wasn't a horrible bother to cancel your cards. Joe's right, these things do happen. Yep, your head on The Scream was just the humor you're good at and probably well known for!