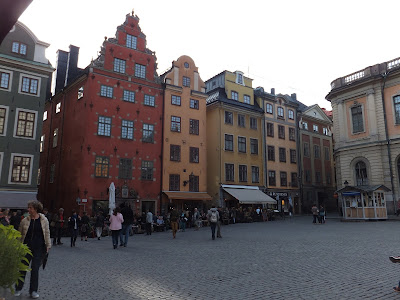 On our last night in Stockholm, we had planned to go to the Grand Hotel for the famous smorgasbord there. It sounded delicious. But the walk to the photography museum had my feet complaining (they were at 12,000+ steps at that point) so we returned to the hotel for a rest and then decided to walk back up to the Nobel Square which was bordered by interesting restaurants. The one we chose was very nice and we decided to eat outside rather than in. There were heat lamps in the ceiling and blankets for laps or shoulders, and it was all very comfortable and cosy.

Saturday was our last day in Sweden. After breakfast we checked out of the hotel, stowed our luggage in their closet, and hurried down to the pier for the Hop-On/Hop-Off. Our destination was midway through the circuit — an island with a pair of museums. First we went to the Modern Museum. There were works by Picasso, Modigliani, even Dali, and some other lesser-known artists. One exhibit was photographs depicting racial segregation in South Africa; this was difficult to view. Adjacent to the Modern Museum was the Architecture Museum. Joe found it interesting. We lunched at the Museum Cafe, shopped in the shop (I had thought I was done shopping until I saw some very nice alligator clips with magnets on them, and then there was a pair of socks inspired by one of the artists and . . . ) and then hopped back on for four more stops, hopping off at Gamla Stan for the last time.

The Old Town had changed its character while we had been gone! Snaking through the square was a band of Hare Krishnas — I hadn’t seen any of them in years. They were peaceful and pleasant enough, but certainly impeded foot traffic. Also, it turned out that today was the Stockholm Marathon, and runners were everywhere — even popping into hotel lobbies to use rest rooms!

When our cab arrived and the driver was told our destination, he exhibited alarm. So many streets had been closed off for the runners! His colorful language provided a vivid commentary as he tried a couple of different routes, finally leaving the city via some sort of throughway and coming out at the ferry terminal. We needn’t have worried — there was plenty of time before sailing.

Barbara Anne said…
What a marvelous next chapter in your Danish adventure! We have friends from South Africa and I can imagine how difficult that exhibit was to view.

AnnieO said…
So glad you're documenting all the little things that happened on your adventurous vacation!
Tuesday, September 29, 2015 3:47:00 PM