The Great Train Mishap OR On To Kalundborg! 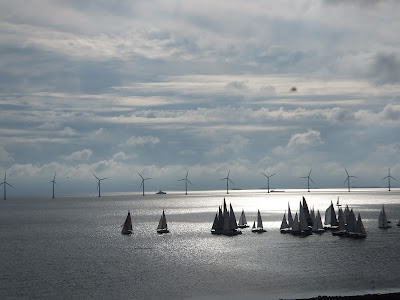 Coming into Copenhagen by sea is very beautiful. Joe went up on deck to photograph the harbor side while I got this wonderful shot. I thought the group of sailboats was reminiscent of a school of fish.

We climbed into a cab and were taken to the central train station. Our train was due to leave at 10:56 and before very long at all the board showed that we should go to Track 4. The sign at Track 4 said that the next train was the 10:56 to Kalundborg and moments later the train pulled in and we climbed aboard and settled in. The train pulled out very quickly and soon it stopped at the first station. My watch showed that it was 10:50 and I mentioned to Joe that it seemed odd that the train had left the station early. We looked up to see that this train was going someplace unpronounceable, but it wasn’t Kalundborg! Oh, no! At the very next station, we grabbed our possessions and jumped off, intent on getting the next train back to central Copenhagen where we would try to find out somehow when we could get another train to Kalundborg. But fate was smiling upon us! We went upstairs where, oddly, the board showed that in 4 minutes the train to Kalundborg would stop here at Unpronounceable!

An hour and a quarter later we were at our destination, where a waiting cab brought us to our hotel, Ole Lundsgaard. The building is ancient, the room is big, the beds are narrow, and the room decor appears to be cast-offs from someone’s grandmother’s estate. Never mind, it was home for the night and it was clean. 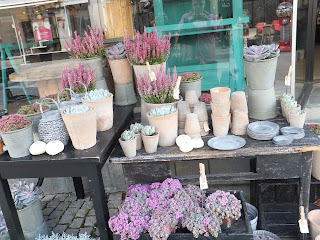 We went out to experience Kalundborg, which is not a tourist town, and admired tasteful, picturesque shops. We decided to get some lunch before perusing them, and after we finished, we learned that the shops close at 2:00 on Saturdays. We didn’t care: shopping wasn’t our purpose in this place. 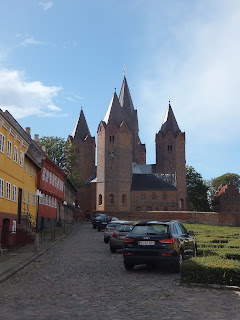 Four years ago on our first trip to Scandinavia, when the ship had docked at Kalundborg, Joe had visited The Church of Our Lady and hadn’t been able to get her out of his head soul ever since. He had to return. And he wanted to get a tour of the spires. This was our purpose. And so we went up to look at the church and found a musical rehearsal taking place, but no one minded that we came in. Afterwards, planning to attend worship at 10:00 on Sunday, we visited the Kalundborg Museum where we learned how very ancient this town was.

Dinner at Ole's restaurant was delicious. We've noticed throughout Norway and now in Denmark that dinner portions are enormous. I've not been able to clean my plate even once. 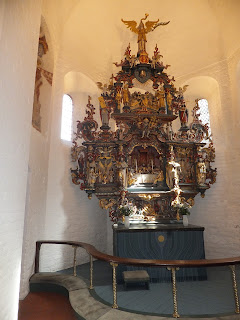 Sunday morning, we went to church. As enormous as the building looks, inside it is a surprisingly intimate space. There were perhaps 30 or 35 parishioners attending.  The service lasted about an hour. There was a small choir in the loft; we were issued hymnals and located the pages with the words and tried to sing along, but not very loudly.

We didn't understand a word of the entire service, but that didn't matter. The language we heard and felt was that God loves us.

When the service was over, we introduced ourselves to the pastor who invited us into the adjacent building for coffee. There we sat with about a dozen Danes, some of whom befriended us and practiced their English. A gentleman named Soren was able to give Joe the complete tour of the church that he had waited so long for while I visited with another lovely man who is going off to Philadelphia  to visit his grandchildren after the Papal visit has ended! 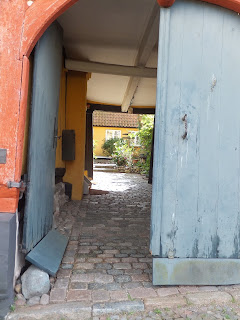 We walked back to Ole's place and ate the boxed lunches we'd had the foresight to order (nearly every place in the village area was closed on Sunday). It was 12:30 and we had a train ticket for 2:58. There was simply nothing to do.

But after the train experience of the previous day, we'd become brazenly and perhaps foolishly confident. Knowing that trains left on the "58" every hour, we walked down to the depot and hopped aboard the 12:58, planning to plead American ignorance if challenged. The conductor punched our ticket without a second thought!

We got to Copenhagen about a half hour before the train we'd been scheduled for left the Kalundborg station! 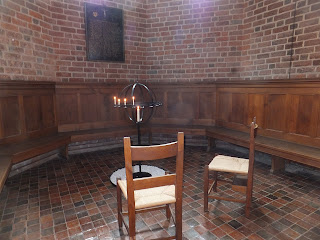 Karla said…
Your pictures are fantastic! HA! I think we all have gotten on the wrong train at some point. Wrong train is upsetting in any language! Glad that it all worked out. <3
Wednesday, September 23, 2015 8:01:00 AM

Janet O. said…
Love your photos--feel as if I am there.
What a blessing that the train problem was resolved so easily.
I'm glad Joe got his tour of the church. Some things haunt you until they happen.
Wednesday, September 23, 2015 10:02:00 AM

Barbara Anne said…
What an adventure on the trains and how perfect that you had to wait all of 4 minutes to hop on the train back to Copenhagen. Not bad at all.

Hurray that Joe's soul is now satisfied to have been in the spires of The Church of Our Lady!

As always, lovely photos, too. Thank you. :)

Lori said…
That is so awesome you got an up close and personal tour of the church and a service! You both sure sound like you fit right in.
Friday, September 25, 2015 7:49:00 PM

Loved to read Your description of my home town and I'm glad that Joe got he's wishes ;-)
To clear up some misunderstandings, "the BAD toilet" is realley a bath and toilet :-D
but then again we have "Fart Kontrol" (speedcontrol) on our highways ;-) and even a town called "Middelfart" :-D
And I know the station named unpronounceable, we have a lot of those :-D but I think the one You are talking about is Nørreport (its todays name for the north gate in 12th century Copenhagen"
I'm glad You caught the right train :-)