It was hard to leave Alesund. It was such a beautiful place, and so different from the rest of Norway (which is a whole other, more typical kind of beautiful). Both of us had acquired head colds as we were leaving Bergen, and just weren't feeling 100%. We had initially planned on taking the guided walking tour in Alesund, but forsook that notion to do exploring on our own. There was more that we wanted to see.

But it was time to go -- other beauties awaited!

Our destination was the famous Geiranger Fjord, a few hours away. The drive was beautiful, and we made frequent stops for photo ops. Again, we went through tunnel after tunnel and finally arrived at Hellesylt. It was September 1, the day the ferry schedule changed from the more frequent summer runs, and we had plenty of time to walk around, buy an ice cream cone, and have a nap before getting on the boat. 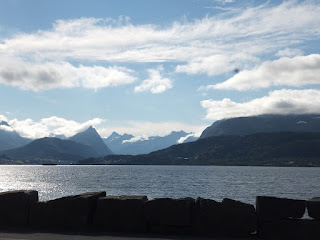 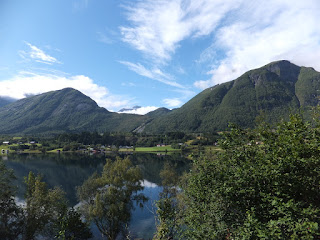 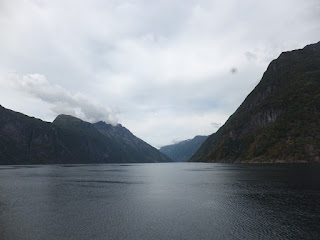 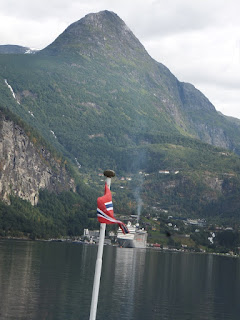 The ferry ride was an hour long; it was expensive, but we were so glad that we did it. On arrival at Geiranger, we drove half-way up a mountain to the Hotel Union, a hotel that was larger and more opulent than we were accustomed to. Joe went for a walk into the little town of Geiranger and when he returned, we went to the hotel's buffet for dinner

We set a wake-up call for six o'clock the next morning. We had a very long drive ahead of us and our penchant for photo-op stops would likely turn the projected eight hours into closer to ten.

First up, though, before we could actually leave the area, we drove up the switchbacks of the mountain to the highest spot overlooking a fjord in all of Europe. This took an hour or more, but it was time well spent. 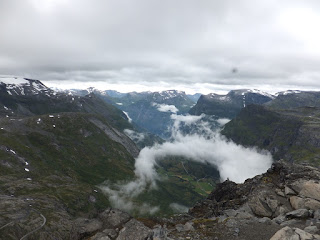 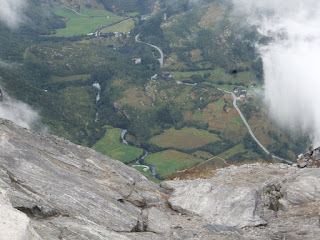 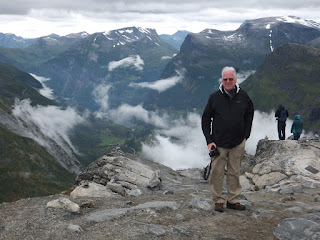 I was intrigued by the multitude of cairns atop the mountain. Joe, speaking from a backpacker's perspective, didn't like them very much. He said they disturbed the natural environment. Well, yes, but I thought they added to the prehistoric atmosphere and were much better than the graffiti we would see in the States. 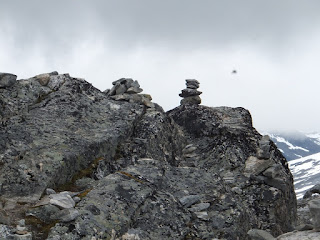 We had been hoping to visit a stave church and the most famous one was really too far off the path for us to swerve. So we were pleased when this one appeared on the horizon and drove up only to find the parking lot absolutely full and a sign that the church was closed for a funeral. So we took pictures outside and continued on our way. 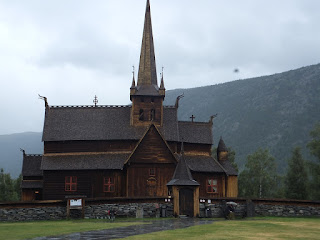 Barbara Anne said…
What wonderful photos and a glorious adventure at the top of the world - or nearly so. I am really enjoying reading every word and imagining ...!