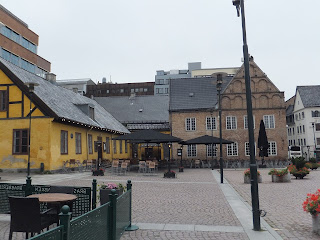 The weather was gorgeous, for a change, on our last day in Oslo, and we had big plans to make the best of it. After breakfast we set out afoot in a direction I hadn’t been before, finally finding ourselves at the harbor. 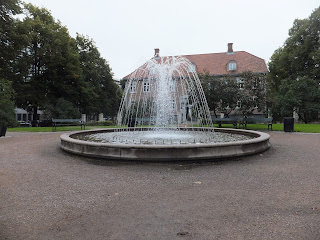 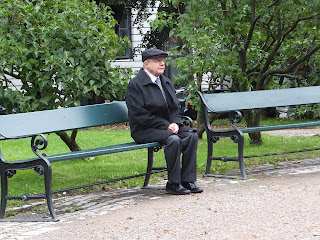 But on the way, we had an interesting experience. My feet were tired after a bit, so as we passed through a lovely park, we decided to sit and rest for a little while. There was an interesting group sharing our space — a small older man with three others who looked like staff or bodyguards. There was a photojournalist with a long-lens camera, taking shot after shot after SHOT of the older man. They were the only other people in the park. We said to ourselves that clearly this man was someone very famous. When the photo session was finished and the journalist left, I sprang up and took a picture, too! 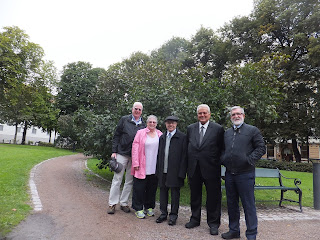 The bodyguards and the subject laughed — the bodyguards stood next to him and they all posed for another photo. Then they motioned us into the group and took another photo. Graciously, they took one with my camera, too. They were good-natured and playful. When we were finished, I said to one of the bodyguards, “Clearly, we have been with someone very important!” He told me that the gentleman was a Socialist from Turkey who had been arrested and sentenced to prison where he served 18 years before recently being released. I was told the man’s name, but the Turkish accent kept me from knowing who he was. We were delighted by their enjoyment of our watching the entire session. I hope I can find out who this man actually is. 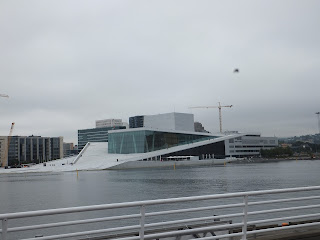 Joe needed to see the Opera House up close and personal, and I didn’t mind that a bit. As you can see, it is gorgeous. 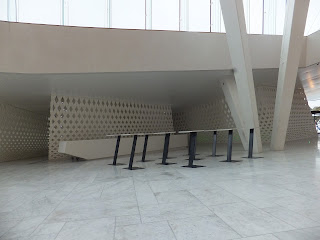 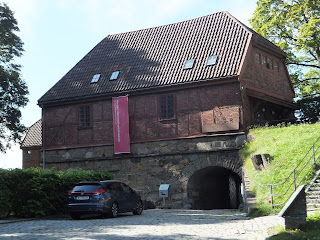 We spent a little time at the Opera House and then went on to the place that was on both of our lists: The National Resistance Museum. It is a pretty enough building in and of itself, but the exhibit took my breath away. Have you ever been to the Holocaust Museum in D.C.? You know how it is so quiet there — somehow even children instinctively quiet themselves in that sacred space. This is the same way. We moved slowly through the exhibit, noticing that as the chronology of the war opened, we began to descend, reaching the lowest level when things were at their worst.

My history knowledge is lacking. I had an American History class in junior high and another in senior high, but neither got as far as World War II. I got through college without taking any history at all — other social sciences filled that general requirement. So when I think of the horror of Hitler, I think of Bergen and Auschwitz and Germany. Because of Anne Frank, I know about the invasion of Holland and recently I read a novel that was about the resistance in France. Now I know about another country.

I guess most of us like to think that if we were in the circumstances, we would choose to be part of the resistance effort. But I wonder how many of us are actually cut out for such work.

We had planned to go to the Sculpture Park, but spent a long time in the Resistance Museum; this just isn’t the kind of place one wants to short-change. 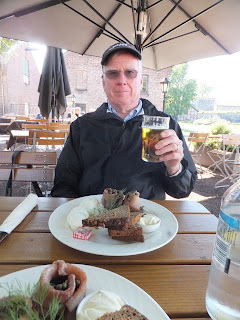 We stopped at an outdoor cafe and loitered over a delectable herring plate for lunch.

Back at the hotel, our luggage was in the storage room. We retrieved it, hopped into the cab, and were on our way to the pier . . . . 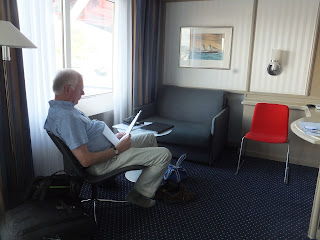 When we planned our trip, from the get-go we knew we didn’t want to fly out of Oslo to our next destination. The overnight ferry to Copenhagen was definitely the way to go. I wasn’t prepared for how huge it would be!

Not long before we left home my dear travel agent/cousin contacted me to say that we were leaving Oslo on a Friday night and what if the boat was full of young party animals who wanted to carry on all night? Oh, dear. For not a whole lot of money, we upgraded to the Commodore class, not knowing what this would mean. 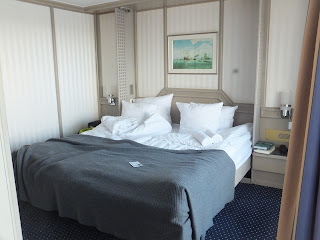 Our room was about twice the size of any hotel room of the past week, with a small sitting area and glorious bathroom. Plus we were on the 11th floor — us, the cruise boat snobs who like small ships! Only 11th floor — Commodore Class — passengers can even BE on that floor, and there was a spacious lounge amidships where complimentary beverages and snacks were available throughout the voyage. Oh, I tell you, we were coming up in the world with our private balcony (two nice wicker chairs) and elegant appointments.


For dinner, there was a choice among several restaurants aboard and we made a wise choice, with himself enjoying lamb chops while I had guinea fowl. Breakfast was a buffet which made me a little nervous. There is a group aboard who are prone to shoving their way ahead of others, and I really wasn’t eager to encounter them over crepes and porridge. To our delight, the Commodore Class passengers could opt for a room service breakfast! A very limited menu, but no squabbling.

Not long after breakfast we arrived in Copenhagen where we had about one hour to get from the harbor to the train station.

Barbara Anne said…
You two certainly know how to make the most of your trip schedule, time, and funds! What an interesting post, from foods, to the Resistance Museum, to the Commodore Class.

I wonder who that man being photographed was? If he'd recently been released from a Turkish prison, being in that pretty, open park must have been a joy for him.

Now on to beautiful, beautiful Copenhagen! Can you just hear Danny Kaye singing those words?