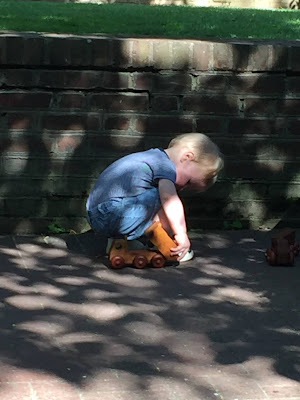 We had a lovely experience the other day, one that would have been different -- and not in a good way -- were it not for Covid-19.

But first the backstory.

In the mid-1970s, over a period of a couple of years, we bought some wooden vehicles from a New England based company called Montgomery Schoolhouse. We picked them out from a catalog and usually only bought one or perhaps two at a time. We have fond memories (but no photos) of our three children playing with these cars and trucks and trains for hours on end. The appeal for both the kids and for us was the plainness, the simplicity of these vehicles. When Tom, Sherry, and Andrew had all outgrown them, we just couldn't give them away.

Many years later, grandchildren arrived and they, too, enjoyed the toys. Now the youngest is nearly eight and they've all moved on to other interests.

The vehicles have been languishing in a couple of big baskets for some time now, and during this time when just about everyone is decluttering and rehoming things, the baskets of trucks came to our attention. Both of us knew just where they should go. Joe spent some time cleaning, polishing and repairing them.

We drove down to center city where our friends live and met up at a park they knew of, a place where there was plenty of space and fresh air. It was surprisingly unpopulated for a weekday afternoon. We put the biggest truck -- the one that hauls a giraffe -- down first and it was so well received! And over the next hour, many of the other things were examined and played with while the masked, hug-free adults visited and caught up on life.

It was a summer afternoon to remember: reuniting with friends, the spacious and beautiful park, the lack of a crowd, the time to just be, and the joy of watching another little boy discover the enchantment of these old trucks. 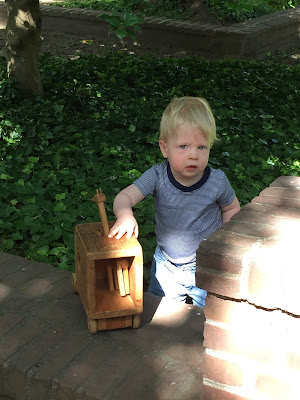 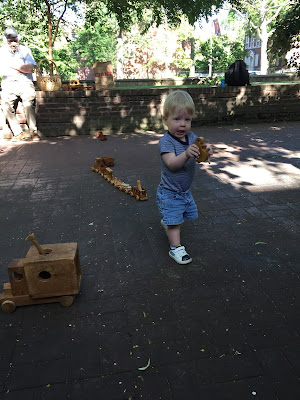 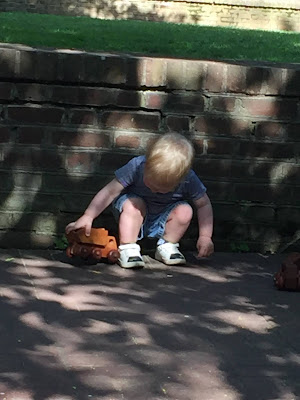 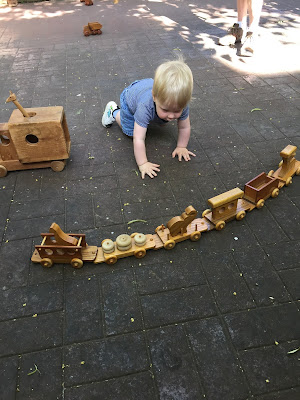 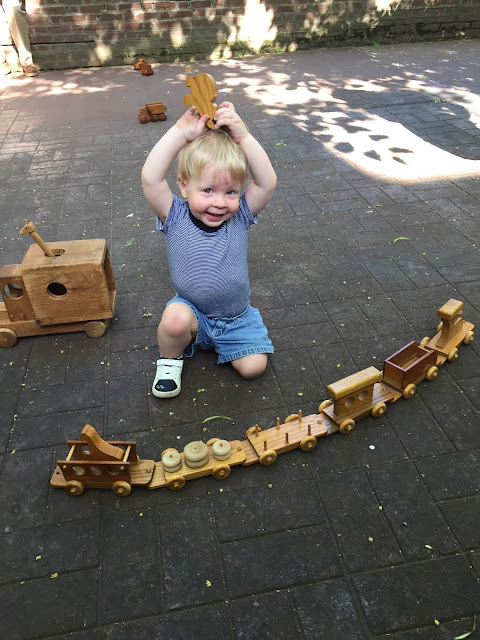 Anonymous said…
My friend in Manheim, PA still makes wooden toys. Rocking horses and circus trains. They never go out of style. My son has his and displays the train under the Christmas tree. Such a happy story and much needed. Dotti in CT
Thursday, June 18, 2020 12:01:00 PM

Barbara Anne said…
Sweet! Did these timeless and wonderful toys go to a new home or are they being saved at your home for future great-grandchildren?

Anonymous said…
Those are great toys with years and years of use to come. You mentioned being hug-free. Living alone, that is one of the most things that I miss, being able to hug. Thanks for sharing.
Thursday, June 18, 2020 2:49:00 PM

Helen said…
As I've said before, your heart is so full of love!