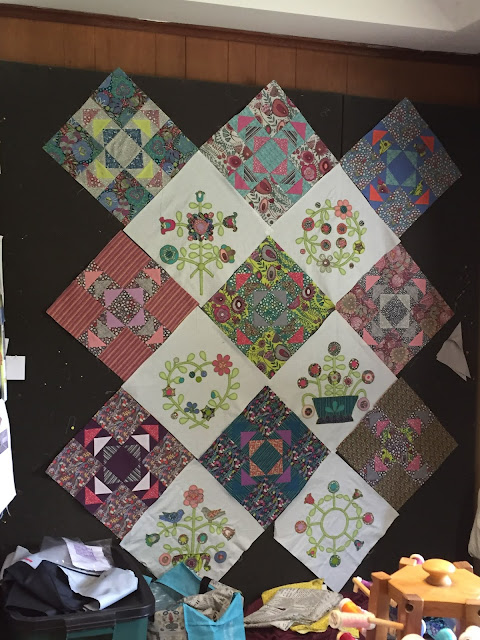 Just because Edwin and the baking have taken up so much of my time recently, that doesn't mean that I haven't been sewing! Far from it, as Honna would say.

I have completed a small project that I cannot share yet; it is a Pay It Forward and the elements were put in the mail on Monday. Once all three have been received, I'll post about it. That could be a little while as one is going to England. I also have all-but-sleeve finished my Guild Challenge project, but cannot share that for another week.

The Cousins are all made and being assembled at present. There should be a photo of them within a few days.

That leaves The Aunts' Quilt. Look! I have finished all six of the large appliqué blocks. There are ten smaller blocks to button-hole; these are the triangles that fill in the sides. And, of course, there are the four corner blocks and yes, they do have pieces to appliqué. So I'll be at it a bit longer with this project. Which is fine. Remember, I'm the one who wanted projects that took longer! The photo above (which you can click once or twice to enlarge if you are interested in detail) doesn't show the three pieced blocks that go below those last two appliqué ones. There was too much stuff in the way. But they are done, and waiting patiently in their box.
Email Post
Labels: Aunts Covid-19

Barbara Anne said…
The Aunties and their blocks and embroidery are wonderful! So glad you're making progress on this amazing quilt.

It's good to hear the cousins are progressing well and are your secret projects. I sent a small package to England about two months ago and it took nearly 4 weeks to arrive at its destination.

Quiltdivajulie said…
So glad you've been able to be so steadily productive on your projects. What you are able to show us is beautiful!
Wednesday, June 10, 2020 8:01:00 PM

Janet O. said…
This is delightful. Some elements are unexpected, but it all works together to be a treat for the eyes. I am impressed by your tenacity with these projects that take longer. At my house, in my hands, they would end up in boxes to be finished in a decade or two--or maybe never.
Thursday, June 11, 2020 2:04:00 AM

Quayquilter said…
You are working towards a very special quilt. It's lovely to see it gradually unfold.

Mrs. Goodneedle said…
The Aunts are all BEAUTIFUL, each and every one! Well done, Nancy; persevering through applique takes time and patience. I can't wait to see your secret project too.
Thursday, June 11, 2020 9:47:00 AM