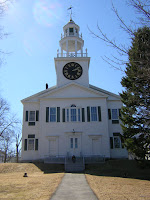 Years ago, when I was a seminary student, I read a wonderful book, A Dresser of Sycamore Trees, by Garret Keizer.  It is a series of reflections by a lay person called to a sacerdotal office.  It's one of those books to read and savor and ponder, one chapter at a time.  Some of you would like it very much (yes, you, you, and you, among others).

In one chapter, Keizer talks about how it used to be that when churches were constructed, clocks were built into their towers or steeples.   People in small towns, out about their daily business, would glance towards the tower to check the hour, consciously or unconsciously being reminded that time is in God's hands.  Over time, new churches were constructed without external clocks, and banks were built with clocks installed very close to the bank's name.  An implication that time, perhaps, is in other hands.

I joke about my commute to work.  It takes seven minutes.  If the traffic is bad, it can take as many as nine minutes.  Obviously, with such a short trip, there is not a large margin for error, and I try to leave home each day at the same time.  At the point where I turn off a residential street onto a busy commercial street, there is a bank on the corner with a huge digital clock.  That I almost reflexively check.  Peculiarly, one morning this past week, just as the man on the car radio was saying, "and the time is seven twenty-four," the bank clock was reading 7:34.  It occurred to me that this was somehow emblematic -- banks (in general, not my particular corner bank which is a local institution with an impeccable reputation) have been doing questionable and perhaps unethical things with money in recent months (years?) and now here they were, messing around with time!  How dare they!

The next morning, everything was back to normal.  "Seven twenty-four" was 7:24.  Must have been a "tech thing."  The traffic was light.  I got to work early.

And every day since, when I glance at the bank clock, I think about Keizer's reflection.  And know that time is in God's hands.  No one else's.

altar ego said…
Very nice post. And interestingly, the clock on church tower says something about the central role of the church in the life of the community. I wonder if clocks stopped appearing because they seemed secular (oh, not so, my dear Alphonse, as you have pointed out). But banks do seem to have corned the digital time and temperature market.
Tuesday, January 26, 2010 8:53:00 AM

Paula, the quilter said…
Thanks for the wonderful post. It is funny how a human can be such a creature of habit. The display on the clock/radio in my car recently started erratic behavior; you could cup your hand around it and kind of make out the numbers or in other instances it would work fine. I never realized how often I glanced at that clock until it started doing this. Hubby and I joked about 'not having time'. It was fixed by the dealership by installing a new radio.
Tuesday, January 26, 2010 11:18:00 AM

Micki said…
I look at my alarm clock several times...a force of habit...I used to do it when I went to work. Actually, time does drag when you do that.Interesting post!
Micki
Tuesday, January 26, 2010 2:05:00 PM

julieQ said…
I am glad you are feeling a little better. I am terribly time driven...I can tell you what time it is day or night, give or take just a little. I love the thought that time is in God's hands, and that time is his gift.
Tuesday, January 26, 2010 4:52:00 PM