In Which Odds and Ends of Subject Matter are Covered 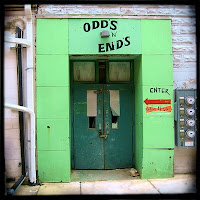 And that's pretty much what I know for now.

LoieJ said…
Sure wish I could get fast internet without a high set up fee and about $50/month, plus tax. I currently pay only $15/month, so I guess I'm spoiled. Our choices here are satellite and radio waves of some sort. The phone company keeps advertising their DSL service, but it is only in limited places.
Monday, January 18, 2010 8:14:00 PM

Laurie said…
Verizon paid our setup fee AND gave us a $150 gift card to switch. (Which I was able to give to a very broke mom in our church. Win-win.) The switch was worth it, although the wifi tends to have petit mal seizures every once in awhile. You know, not a complete loss of consciousness, but it's definitely not all there. Still, though, I like it more than Comcast, AND I get GolTV soccer channel!

As far as the dark and dreary doldrums, ditto. Although I just looked outside at 5:20 and discovered it's no longer completely dark at that time, which cheered me no end.
Monday, January 18, 2010 8:44:00 PM

wordmama said…
I understand your problems with SAD very, very well. I dread the time between November 21 and Jan 21 when the days are shortest. My worst time, unfortunately is right around Christmas when I need to be bright and lively and I just can't do it. I, too, am happy to see the lengthening days. It gives me hope.
Monday, January 18, 2010 10:46:00 PM

Annieofbluegables said…
My birthday falls in December, and I see it as a celebration starter for Christmas. This year was much harder because of a milestone I hate to admit I've reached.
I get sad in January, and I always blamed it on taking the tree down, all the beautiful lights that cheered me on every corner and park are gone. It is just dreary.
but like the last commenter, I can see daylight longer in the evenings. That is very nice.
~a
Tuesday, January 19, 2010 3:30:00 AM

Happy upcoming Birthday! I generally think that celebrating birthdays at this time of year are a great way to insert some light and fun into a dreary time of year. AND, I'm convinced there's something behind family members having clusters of birthdays around the same time. My totally unscientific speculation is that it has something to do with the survival of the species. The gene pool passes on the data that survival at the given time during the year's cycle has been proven, so why not repeat? I did a rough poll about this on my blog a couple of years ago, and it seems the cluster seems to hold true for most families. A curious thing.

Joanne Lendaro said…
Hey Lady, good to see that you are feeling better and getting out with some friends. Birthdays are just another day, you are as young as you feel, so keep telling yourself that you are only 35! Can't wait to see your finished projects, share when you can. Read you all the time, should post more, sorry I'll be better. Have a wonderful day!!
Tuesday, January 19, 2010 8:44:00 AM

Pat Deck said…
Happy Birthday to all of the Stevens clan!

Yep, I know all to well what SAD is. Not fun, expecially when everyone else tells you it's a happy time of year.

Glad to hear about the mortgage and that they will be in their new place soon. That must be a load off your mind.

Also glad you are feeling better. I discovered something interesting when I took the wonder drug Mucinex to try to fend off the beginning of the crud. For some people (me, for instance), taking Mucinex at night is like taking speed. Anyone who got strange messages from me at 2 or 3 in the morning on Friday/Saturday night, just ignore them.
Tuesday, January 19, 2010 11:46:00 AM

*karendianne. said…
To which a reader replies...