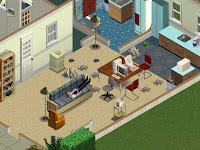 A couple of weeks ago, I wrote here about my unanticipated urge to revisit The Sims.  I thought it might help me to escape some of the reality of the present, ongoing, dreadful economic climate.  A climate that, despite what we read in the paper or hear on the television, is not improving.  At least not Near Philadelphia.  My husband's practice has been threatened and the threat is ongoing.  At the school where I work, we continue to look at staffing and structuring and enrollment.  It is nearly time for 2010-2011 employment contracts to be issued.  There are worries about whether or not there will be salary increases.  There are worries about whether or not certain jobs will still exist.

So I thought about The Sims, and the illusion of control that they provide.  And decided that that was not entirely a bad thing.  As a hospital chaplain, when I looked at the famous Kubler-Ross stages of grief, I learned that the stage called Denial serves the very excellent purpose of allowing the sick person to escape, for a period of time, from the reality of what is happening to him.  Saw a parallel.

I learned that there's a new version of the Sims game.  Actually there have been several versions since I first got to know sophisticated Mortimer Goth and his vampy wife Bella.  The game store at the mall had the new version.  For fifty dollars.  Which, you know, I just could not justify.  Ebay, however, had the old, original version for considerably less and I went for it.

So now, each evening before dinner, I spend some time manipulating the lives of the family I created: Noah Ark and his sweet, talented wife Joan.  They are moving along on their chosen career paths and not feeling threatened.  They are doing a little redecorating in their public rooms.  They are close as close can be with Bella and Mortimer.  Their biggest problem right now is their cute but slightly bratty daughter who throws her snack bags on the floor until the place looks a bit like the internet photo above.

They practice their skills, get promotions, interact with their friends (who are also employed), and shop for new furniture.

For a while I can forget what is going on everywhere else.

Pat said…
How much rent do I have to pay to come live in Ark d'Nance? I'll pick up the snack bags and smack the slightly bratty daughter with one of my Olfa rulers? By the way, is Joan's middle name "Van" or "of"?

Guenveur in Kent said…
Yes, these are scary times. However, you and Joe are bright, skilled and people of faith. You will be all right. You have more intrinsic resources than many people who are struggling. I do not minimize your worries; just a reality check and all.
Saturday, January 30, 2010 9:33:00 AM