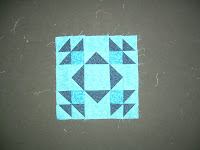 It feels like a long time since I've posted any quilty content.  Well, that is about to change.  Beginning now.  I've not been sewing much but I've been sewing.
You know those monthly birthday blocks I talk about?  I looked at the schedule and thought perhaps I should get the ones for spring finished early, what with two babies due at the beginning and end of April; it only makes good sense and less pressure to get the blocks for March, April and May finished early if I can.
Julie comes up in March and she requested an all-blue block with a name that relates to wind or water.  Here's Summer Winds for Julie.  It's not quite as teal-y as it looks in the pic.  But it's not true blue either.  I don't know if Julie will like it because the color may be off.  So she prolly will get an additional block in a bluer blue.  I like Summer Winds myself and would like to make some more of 'em. 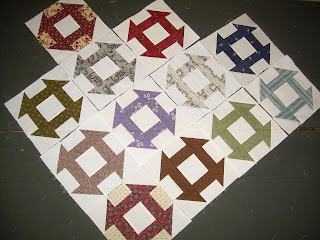 And here we have the CW-CDs that I've received so far from the groups that are making them for me.  Don't they look spiffy on point?  I'm probably going to leave them that way.  I'm thinking of using muslin lattice with a CW for cornerstones and the same CW for the  setting triangles.  How does that strike you?
These blocks finish at nine inches and there are still ten or twelve more to be received!

altar ego said…
Lovely! I think your CW-CDes are stunning, and I really like the Summer Winds, too.Last night in the chill of the living room while my husband was under the only dog-friendly cover, I thought it might just be time to make a lap quilt for the living room. I'm looking for potential patterns, and you are giving me ideas!
Sunday, January 31, 2010 9:20:00 AM