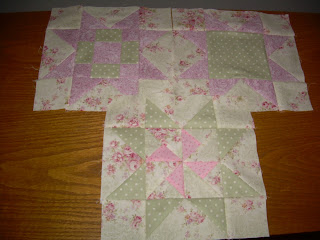 Each month I have a few blocks to make for other quilters. I like to do them as early in the month as I can. Susan's blocks, however, fell by the wayside because December was so busy. Fortunately, Susan had December for last year and January for this year, and sent the same fabric for both months.

She sent the sweetest floral and asked to have it used for the background. She sent some pink and some green scraps and said we could use those or use something else. There was enough background for me to make her three blocks instead of just the two, and I added another fabric to the mix. They'll be heading out to her tomorrow. Then it will be on to Chizuru's block; she's looking for blue on cream Churn Dash -- that will be a lot of fun to do!

Judi said…
These look beautiful, Nancy - and are proof that once you start making little blocks inside Sawtooth Stars, you can't stop!