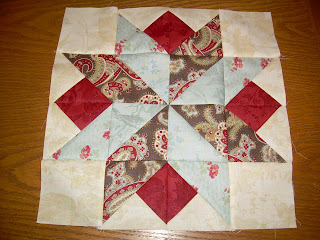 This was the first time that I didn't get the block made within the first week of its arriving. Heck, I didn't get it made during December at all! Mindful that it is now January and early next week FQS will be shipping Block Eight, yesterday I put Seven together.

It is very pretty, I think. This is going to be a wonderful quilt. 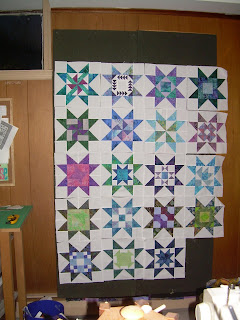 The cool batik stars on white blocks came in early in December, too. I was eager to swap them out. Trouble was, I couldn't find one of my sets! I looked high and low, but obviously not high enough or low enough. Finally, just before we were to leave for Richmond, I found them.

Swapped them out yesterday and they went in the mail today. Six people each made six of three different blocks. The idea was to make six-inch blocks, and set them as the centers of twelve-inch Sawtooth Stars. I love the variety, I love the batiks, I love the whole thing.

I had a stray six-inch block in the right colors and turned it into a block.

Looks as though I need to make one more before I can set them!