Some images from our Christmas, Near Philadelphia. 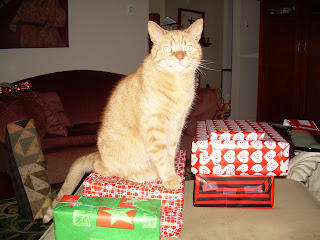 Bodacious, normally a rather timid and sedate sort of fellow, was quite into Christmas this year. When I got up Christmas morning, he was under the tree, almost smiling, but left that spot before I got the camera. As Joe and I opened our gifts to each other, he was very much involved, sitting on the parcels and nestling into the discarded gift wrap. 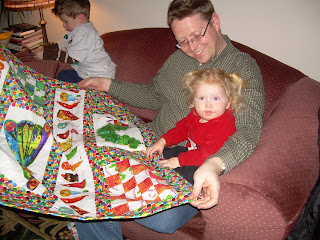 Once the family arrived, everyone thought that the first present to be given out should be Caroline's callapitter quilt. Her stuffed VHC that she carries everywhere is named "Charlie," and as she examined the quilt, over and over, she'd point and say, "Charlie!" It was almost as big a hit as the stuffed Big Bird that A&A gave her. 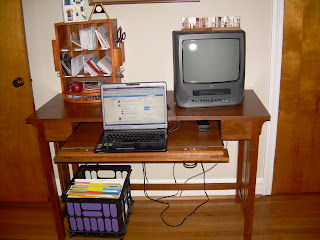 For years, one section of the kitchen counter has served as the home for the laptop, the bills, the incoming mail, the recipes to sort, and all that kind of thing. It has been unsightly. One of Joe's gifts to me was this terrific little Mission desk for the morning room, just right for holding the laptop, the mail sorter, and place underneath for organized storage! 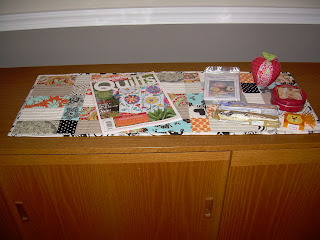 On Christmas Eve afternoon, operating on the principle of "It's Christmas in Australia," I resisted no longer and opened the bounty that Lurline had sent me. I'd opened the magazine earlier (with her blessing) and had enjoyed reading the detailed instructions on a double-layer Dresden plate. I marveled at the Bodacious look-alike tape measure she sent me, the precious apple pincushion, and the absolutely terrific table runner! Thank you so much, my generous new friend! We're saving the sweets for another day and will put the sweet little tin to good use -- perhaps holding paperclips on the new desk!

Today we had a mixed constituency brunch; about 21 were in attendance. I'd woken up with an inexplicable partial black eye, quite mysterious. I imagined being asked about it 21 times, so we put a sign on the front door: "She doesn't know how she got it. Welcome. Please come in." Some people figured it out more quickly than others. It remains a mystery.

Joe made traditional Swedish glogg which warmed everyone who partook. I made the egg-cheese-sausage casserole and something new: Greens and Grits -- something we'd enjoyed at a Cape May B&B in October. Many of the guests brought something along; Susie's grilled pineapple was a big hit as was Bonnie's coffee cake. The best line of the day, best preserved out of context was Honna's: "Are most circus people Republicans?"

Micki said…
It looks like you had a lovely day and that you received wonderful gifts!
Happy Holiday!
Micki
Monday, December 28, 2009 8:46:00 AM