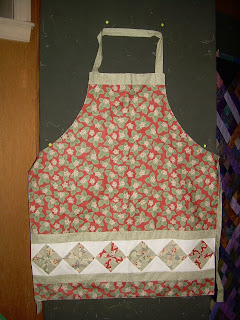 Six of us spent much of the day down at the church, sewing together. Honna was working on a king-size YBR for her daughter, Helen made a pair of pillowcases and then worked on a wonderful vari-color quilt with black background, Judy was in journal-cover mode, Sherron was catching up on BOMs, Turbo was assembling a glorious Christmas quilt made entirely from scraps that Nubbin had given her, and I made an apron.

I'm involved in a pollyanna that will meet this week. For the past several years, the gift exchange has been white elephants and this year we decided to get something nice in the ten-to-fifteen-dollar range. I had made a pair of aprons earlier in the year for a wedding shower and thought one of these aprons would be just the thing for the pollyanna. I got it all done and then did some odds and ends. I sure hope whoever ends up with it is an apron-wearer. So many people aren't these days, and that just astonishes me. They must be fastidious cooks. Or perhaps they don't cook at all. 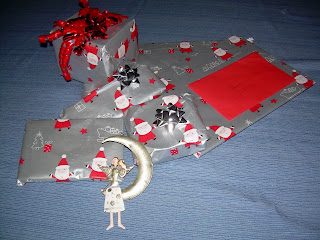 When I came home, I was tired and needed a bit of a nap. While I waited for Joe to come home from his errands, I looked at the mail, both electronic and snail. I was delighted to find that the latter had brought me my SSCS parcel. It came from Lurline in Oz and is very enticing. It even smells a bit of chocolate! I think I'd best get someone to hide it from me or I'll never make it to Christmas morning.

We were permitted to open the ornament that was enclosed, and I just loved the one that Lurline selected for me. I've never seen one like it and am eager to get our tree up and put this terrific angel on it! 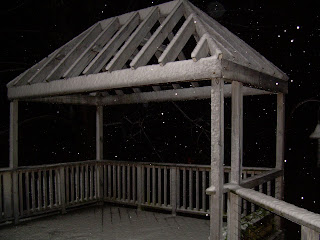 Shortly before we finished sewing, someone looked outside and noticed that it was snowing "but not sticking." That has changed. While those who work for schools (all but one of the six of us and that one has retired from teaching) find snowfall on a weekend to be an utter waste, there is something magical about the first snowfall of the year.

Himself and I went out for pizza for dinner and the snow is clinging to the ground and apparently up to four inches are predicted.

So that's my Saturday, Near Philadelphia. It was pretty darned good!

Lurline said…
Hi Nancy,
I'm so happy you have received my parcel - I do hope you enjoy! Nuh, no chocolates, you just wait and see. I was a bit concerned that I hadn't packed it well enough, so pleased it has all arrived in one piece!
I have been following you secretly for quite some time - love your Posts, especially the COW! Now I will be able to come out in the open and hope you will join me!
Talk again soon - hugs - Lurline♥
Saturday, December 05, 2009 9:56:00 PM

Three Birds Inspired said…
I know what you mean about "wasted" snow! I was so excited to get some but it would have been better on a work day (since I can work from home when it snows)!
Sunday, December 06, 2009 3:01:00 AM

Susan said…
I also work in a school and when I saw those flakes, my first thought was why the snow couldn't have waited until Sunday night so I could possibly have Monday off. But the snow that stuck to the trees made the drive to church awfully pretty this morning.
Sunday, December 06, 2009 1:15:00 PM

The Calico Cat said…
While those who work for schools (all but one of the six of us and that one has retired from teaching) find snowfall on a weekend to be an utter waste, there is something magical about the first snowfall of the year.

Miri said…
Great apron!-the fabric is just gorgeous and I love the band of pinwheels on the bottom.