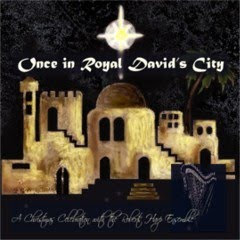 I don't know if it is true for everyone, but for me, there hasn't been one single favorite Christmas song for all my years. I remember when, in high school, "Silent Night" gave way to "O Holy Night." That one lasted for a long, long time, and then one year it became "It Came Upon a Midnight Clear." After we joined our church, I found "Of the Father's Love Begotten" to be tremendously moving, and it topped my list for several years.

And then it changed. It was Sherry's last year in college and, as I did each December, I left after lunch one day to drive out to the middle of Pennsylvania to bring her home for winter break. I so enjoyed that solitary drive out there, an easy drive with pleasant scenery, and the wonderful anticipation of the return trip with my best girl in the front seat next to me, sharing what her last weeks had been made of and what her hopes and plans for the weeks off would be. My classical radio station had just begun playing Christmas music and I knew I had about one hour of the two-plus hour trip to enjoy it before I'd lose the station. I had come to a stretch of highway with no other cars around to jockey position when the radio began to play the most beautiful rendition of "Once in Royal David's City," sung by a boys' choir. The slowness, the simplicity, the loveliness of the carol moved me so much. I didn't want it to come to an end. I've never heard that version again, but the carol -- one that isn't played all that often -- has become the one I will stop anything to listen to.

I heard the carol again yesterday. Again I was driving when it came on. And I pulled over, stopped my car, and just listened. I set aside my worries about the economy, my stress at work, and even my sadness for my newly widowed cousin, and traveled back in time to that trip to Gettysburg when I was filled with joy and anticipation as I listened to the sweet voices of those young boys. I remembered and I felt blessed.

It is the final week of Advent. I look forward to visits with siblings and cousins, to the logs in the fireplace, to being with my children and grandchildren, and to the Christ Child's being born/borne anew in me.

Once in royal David's city
stood a lowly cattle shed,
where a mother laid her baby
in a manger for his bed:
Mary was that mother mild,
Jesus Christ her little child.

He came down to earth from heaven,
who is God and Lord of all,
and his shelter was a stable,
and his cradle was a stall;
with the poor, the scorned, the lowly,
lived on earth our Savior holy.

And, through all his wondrous childhood,
he would honor and obey,
love and watch the lowly maiden
in whose gentle arms he lay:
Christian children all must be
mild, obedient, good as he.

For he is our childhood's pattern,
day by day like us he grew;
he was little, weak and helpless,
tears and smiles like us he knew.
and he feeleth for our sadness,
and he shareth in our gladness.

And our eyes at last shall see him,
through his own redeeming love;
for that Child who seemed so helpless
is our Lord in heaven above;
and he leads his children on
to the place where he is gone.

Not in that poor lowly stable,
with the oxen standing round,
we shall see him; but in heaven,
set at God's right hand on high;
when like stars his children crowned,
all in white shall wait around.

Three Birds Inspired said…
For me, Nancy, the carol that lifts my heart most at Christmas is "In the Bleak Mid-Winter". Promising to give my heart to the Christ Child is so emotionally powerful it nearly takes my breath away.
Friday, December 18, 2009 7:55:00 AM

Kris said…
I love Christmas carols too. They are so powerful. Thank you for sharing your favourite with us!
Friday, December 18, 2009 8:49:00 AM

Pat said…
I always love your posts -- funny, insightful, thought provoking. This one touched me. This is one of my favorite carols as well. Perhaps because it is not one of the more popular ones, the words and melody don't flash by as part of the ubiquitous musical Christmas backgoround, and we pay attention more. I remember singing it once with a choir, accompanied by a flute -- not unlike a shepherd's flute. Haunting, speaking of expectation, quietly majestic.

Unknown said…
I, too love Once in Royal David's City. It must be a Luthern/Anglican thing. May this next week be blessed with peace and anticipation of the miracle about to happen again and touch all of our lives.
Friday, December 18, 2009 3:25:00 PM

Unknown said…
One of my favourites too - over here in the UK the first verse is always sung by a young chorister (usually a small boy) as a solo - one year for our church carol service Sarah (at about 9 or 10) very bravely opened the service singing that first verse in solo. I can't think of many Christmas carols I don't love
Friday, December 18, 2009 5:20:00 PM

SallyB said…
I love "Once in Royal David's City". A beautiful carol if ever there was one. I have 6 CD's of German Christmas music on my iPod and some of those German songs are just stunningly beautiful and remind me of a Christmas spent in Germany with Em and Chris and their kids back in 1996. I don't understand the words but I love the melodies and as I listen to them, I can close my eyes and see the German landscape all decorated for Christmas. One thing they do right are the holidays. They sure know how to make it festive and moving!
Friday, December 18, 2009 6:39:00 PM

Susan said…
I've always loved Christmas carols and have had several favorites. I find as I get older that I listen to the words more and that, increasingly, they inspire awe at the miracle of Jesus' birth.
Friday, December 18, 2009 7:05:00 PM

Guenveur in Kent said…
It's amazing that there are still "new" carols to discover. Years ago, we heard "Stille, stille, stille" at a CHristmas church service and came home and stood out in the clear cold night and sang it to the moon. We still sing it. And then a few years ago, we heard "In the bleak midwinter" and we sing that one too. There are two versions of it; the one we know is by Gustav Holst. I think Christina Rosetti wrote the poem.It's lovely.
Saturday, December 19, 2009 5:26:00 PM

Judi said…
As Anne has already said, Once in Royal David's City IS when Christmas starts for us.

We are lucky enough to be able to go to a carol service at Canterbury Cathedral, when the turn out the lights in the cathedral when the choir are ready to make their entrance. Moments after the lights go out, the sweet, pure voice of a young chorister sings the first verse of this carol.

If you didn't feel Christmassy before then, you do before the first line has finished!