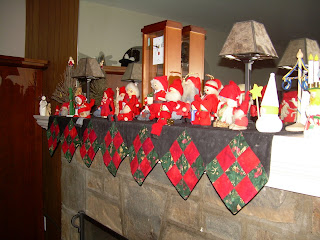 The Swedes have come out of the dark attic and taken up residence on the mantel above the fireplace. The first picture I took had a great big reflective blur from the mirror; Joe said if I took the picture at an angle I could avoid that. He was right, of course, but this shot doesn't show off the Swedes as well as it might.

The first one was a gift from my sister back in 1981 and over the years Carol has given me most of the others, although I believe I did buy one or two.

The scarf on the mantel was a gift from my sister a few years back; it is just perfect there and shows off the Swedes so nicely. Sherry has said that if I ever do get to go to Sweden I'm going to be disappointed if I find out that people aren't all wearing little red knitted sweaters . . . . 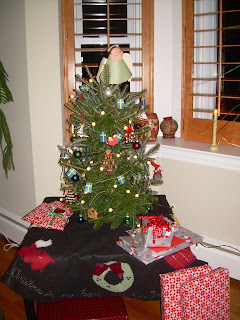 I do like seeing the lighted Christmas tree, especially a week or two before Christmas as the wrapped packages begin to accumulate beneath. But neither I nor Joe really enjoys trimming the tree. And now we don't have our kids to help us out. A half dozen years ago when we had a particularly frisky kitty, Jack, we decided it would be folly to have a full-size tree and elected to get a tabletop tree. That worked out very well -- Jack found the wrappings and the ribbons pretty fascinating and didn't seem to feel the need to try to climb the little tree.

When we do get a full size tree, I like a tall skinny one (shaped more like Joe than like me, actually). Those are hard to find.

This year we decided to go back to the tabletop tree. We got it on Saturday. It holds just one string of lights and we carefully selected which ornaments to put on. The angel on the top was made back in the early '80s when Sherry and Andrew were in nursery school. We don't know which of them made which angel; one year one tops the tree, another year the other will. And that suits us fine. You can see my SSCS packages, still intact, to the right. My sister made the tree skirt as a gift a couple of years ago. In 40 years we'd never had one and we love the time and effort she put into making this one for us. 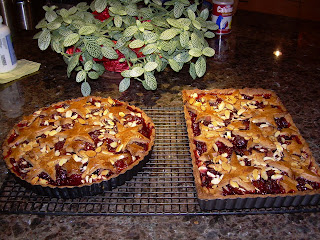 I usually make four cranberry apricot amaretto tarts each year. Three of them are gifts to people who have come to anticipate them and the fourth stays here. The tarts are a lot of work with a very peculiar crust that calls for grated lemon peel, raw egg yolks and hard boiled egg yolks among other things. The recipe calls for a lattice crust. I tried that once. And that was enough. The next year I was inspired to make the star crust topping and that is what I've done ever since. I started making the tarts around five o'clock and took them out of the oven about 9:15. Tomorrow they'll get wrapped in foil and go into the freezer until it is time to give them away.

The candles are in the windows, the Advent hanging is in the foyer, and the nativity scene is on the mail table. Packages are gradually getting wrapped. It is beginning to look a lot like Christmas, here Near Philadelphia.

Tanya said…
Everything looks so cozy. I guess we will be without our tree since we have a LOT of frisky cats this year.
Tuesday, December 15, 2009 7:14:00 PM

*karendianne. said…
Nancy, that's really clever with the Star crust for those tarts. What a lovely tradition to give those to certain special people. They look super yummy. And oh but I love the Swedes. I thought the picture was just fine! Enjoyed the tree, too. Feeling very like Christmas at your house. Warmly and with love, *karendianne.
Wednesday, December 16, 2009 7:14:00 AM

StitchinByTheLake said…
Nancy I really love your mantle scarf. I've been thinking of making one but haven't "gotten around to it" yet. There are a lot of things I haven't gotten around to! blessings, marlene
Wednesday, December 16, 2009 8:37:00 PM

Kim said…
If you click in to enlarge the photo, you can see the Swedes nicely! What a fun and unusual collection! Happy holidays!
Thursday, December 17, 2009 1:43:00 AM

Belmont said…
Hi,
I came across your blog when I was
using "The Google" to check out other people's problem resolutions (or lack thereof) with Comcast (Yours was back in 11/2008).
I noticed the photo of "The Swedes" on your mantel. My late mother had quite a collection of these and by default I've more or less inherited them. I call them "The Christmas People" because they come out at Christmas. Some of the figures are from Denmark as well.
Anyway, it's nice to see them at someone else's house.
Happy holidays and New Year.