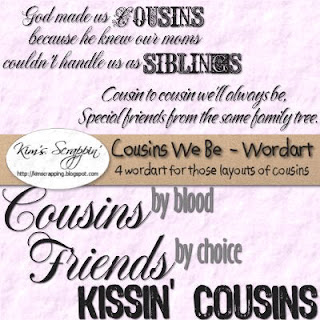 I come from a small family. Growing up there was a mother and a father and two girls. That's all.

The extended family was small, too. On the one side, two girl cousins, sisters. On the other side, two cousins, a brother and a sister, who grew up to move far away. And another girl, a singleton.

When we all grew up, my sister and I looked at that singleton and felt sorry that she didn't have any more cousins than just us (and the ones who moved far away). We decided that in such a small family, cousins should be shared.

And so we had five girl cousins, all grown up and married to tall men. The girl cousins would get together for lunch and laughter from time to time. The tall husbands would show up at weddings and major funerals.

Then one sister-cousin and her tall husband moved far away to a warmer clime. And somehow, we started seeing more of the other husbands. These tall men learned about cousinly laughter. And came to enbrace it. We got to know them better. For too short a time.

First we lost the one who remained a redhead, even after retirement. The one who was good in emergencies, who could fix anything, the one I was closest to, except for my own.

And too soon after that we lost the funny one, the quirky one, the one who fathered four daughters and then bought a male dog, the one who loved to travel.

Four girl cousins and two tall husbands out to dinner together, reminiscing about the cousin who moved south. And then we got word that her husband was gone; her husband, the one we felt we knew the least, the one who liked camping, of whom my strongest memory was being their flower girl at the age of four when my grown-up cousin married this tall, handsome man.

And now we have lost the fourth man, the tall and broad-shouldered one whom we'd come to believe was invincible after a near tragedy in the spring, the one who hunted, who set off fireworks, who could tell a good story with great detail, the one who wore the boots and who, on his last day, had hunted.

Four girl cousins. Who will gather again. Who will laugh again.

And one tall husband.

*karendianne. said…
You've left with me a depth of feeling that brings to the surface real chills. As you write I am pulled into the rhythm of your poetic voice and the rhythm of life. I am captivated by the truth of the way we collect together and bond and the way we collect together and weep. The truth that the bonds solidify as we let go. That is a bonding that I will let sit with you but add some companionship as I write.

Oh Nancy, I don't know if my words can even touch upon all you've written here but my heart leaps out to you send with electricity of connection and bonding love. How do I know that power is there? The chills. Energy. Electrified. Love. *karendianne.
Saturday, December 19, 2009 7:47:00 AM

Judy C. said…
Oh what a beautiful tribute to your family. I wipe away tears as I type.
Know that you and the cousins will be in my thoughts and prayers.
Blessings,
Judy C.
Saturday, December 19, 2009 11:21:00 AM

Anonymous said…
I, too, cried when I read this for I am the cousin that moved west. My father and Nancy's (Bonnie's) mother were twins. I am sustained by their love and attend their gatherings in spirit. We are so much alike in so many ways - God and family first, crafters, quilters. While we are small in numbers, we are mighty in what counts. Love you and miss you - my prayers will be with you Sunday as you say goodbye.
Saturday, December 19, 2009 12:05:00 PM

Pat said…
Nancy, my friend, you have been blessed with many gifts: your family, your faith, your artistic ability, your love for fellow travelers. But I think that one of your greatest blessings has to be your ability to reach into your heart and put your thoughts into words that touch the hearts of others.

What a lovely tribute to your cousins and the tall men in their lives. Love and peace to all of you in this very difficult time.
Pat
Saturday, December 19, 2009 3:40:00 PM

Cardygirl said…
What a beautiful & special post celebrating the special relationships we have. Thinking of you at this time.
Saturday, December 19, 2009 4:50:00 PM

AnnieO said…
I agree with Karendianne, your words are powerful, Nancy. Family is strong with you, extended to all you hold dear. My sympathies on the losses deeply felt, of all those tall husbands, fathers, and cousins.
Saturday, December 19, 2009 6:33:00 PM

LoieJ said…
Lovely reminiscence. How we just don't know what kinds of traditions we are creating when we start something. And they define us.
Sunday, December 20, 2009 6:01:00 PM

Unknown said…
You know Nancy, by rights he shouldn't be here either after his close shave the other year, but he was obviously meant to hang on in there for you girls - I'll bet you hold onto him just that little bit closer today (((hugs)))
Monday, December 21, 2009 2:55:00 AM

SallyB said…
Nancy, I so understand. I am still mourning the untimely loss of my beautiful cousin Terry this summer from brain cancer, the same kind that killed Senator Kennedy this year. On my mom's side, I have a HUGE family (110 members of four generations), on my dad's, very small, three cousins and one surviving aunt, plus the children of my two married cousins (the third is mentally ill and lives at home with my aunt - no telling what will happen to him when my aunt's time comes, and she's in her 80's).

I've had a hard time adjusting to my two sisters living so far away and hardly getting to see or talk to them. The occasional e-mail, Facebook post.....the even rarer phone calls......we're all so busy getting on with our lives that time to spend with one another in one fashion or another, whether online or on the phone, becomes rarer and rarer.

Wendy P said…
Nancy- I am just reading this now, but I want to thank you for taking time to remember those in our family we have lost. For those who do not know, it was my father who was the last one we have lost. Reading this makes me cry, filled with memories, but thankful also that others have been touched by him and care enough to tell others about him. He had a perfect last day for him, but all too short for those left behind.
I encourage all of you to treasure life and those around you, for all too quickly things can change.
Thank you again Nancy- Love your cousin's daughter
Wednesday, February 24, 2010 4:20:00 PM