An Excursion to Roskilde 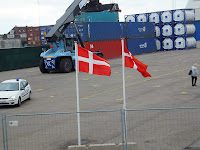 On Thursday, we pulled into Denmark for the first time. The port was Kalundborg, and we had signed up to go on the excursion to Roskilde.  After several days of the blue and yellow flag of Sweden, it was interesting to see the red and white Danish flag.

There was a large standard cruise ship at the pier when we had arrived. Apparently it had just pulled in. 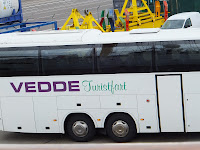 Before very long at all we had cleared customs and were free to leave the ship. Star Clippers had apparently made a connection with the big ship and the two together arranged a shuttle that would continuously go back and forth into Kalundborg. At the end of the excursion, I returned to the ship and Joe took the shuttle into town because he wanted to visit the five-spire church, The Church of Our Lady. He took this wonderful photo of the church. These photos of Danish countryside that follow were taken from the window of the bus, the Turistfart (!). 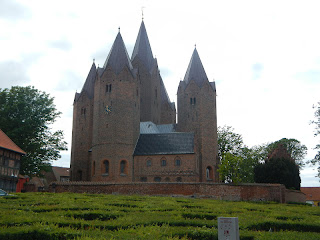 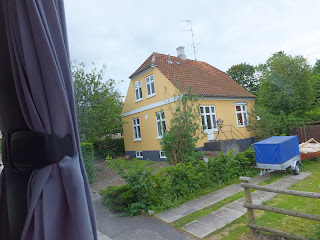 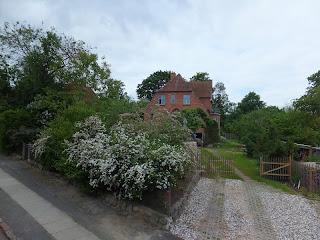 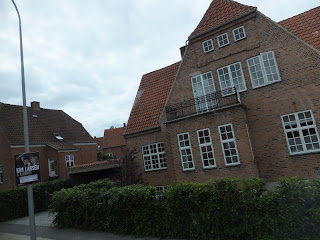 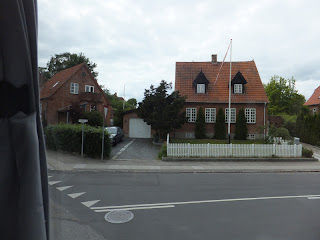 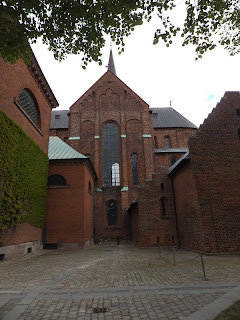 Our excursion destination was the town of Roskilde, about a thirty-to-forty minute drive through the country. We were fortunate that our guide, a lovely man about our own age who spoke impeccable English, was a native of Roskilde and had lived there most of his life.

As we traveled, he spoke about life in Denmark, sharing that the income tax was very high, but covered all medical care and education expenses. He explained about the recent modifications of bike lanes throughout the country (I believe there are many  more bicycles than automobiles) so that they would extend beyond the motor vehicles at traffic lights, making turns so much safer.

Roskilde is known for two major features. The first is the Domkirke Cathedral, built in the twelfth century. 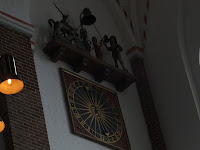 Our guide told us that Domkirke was his home church: he had been baptized and married there; his children had all been baptized there, and one day he would be buried from there.

The first highlight that he pointed to was this twenty-four hour clock. It was the first time I'd seen such a thing, and it was fascinating to see how the various bell chimes on it worked. The next photos all were taken inside this magnificent cathedral. 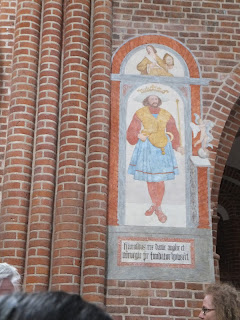 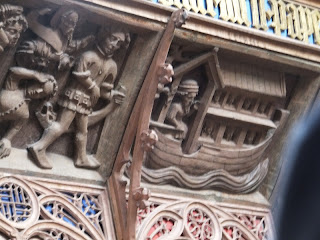 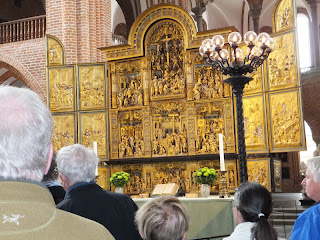 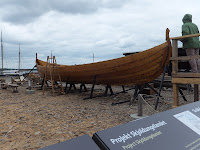 From the Cathedral, we rode a very short way to the second attraction of Roskilde, the Vikingeskibmuseet (Viking Ship Museum).As we rode, our guide educated us about Vikings, emphasizing that their helmets actually had no horns! We have Wagner to thank for the notion that the horns were affixed to the helmets. Horns were often found buried near hemets, and they had been used for drinking. In the middle of the twentieth century, five sunken Viking ships were discovered and raised from the entrance of the fjord. They have been beautifully restored and one is shown in the first picture that follows. The other photos were taken on the site, showing smaller Viking-style boats in use today. 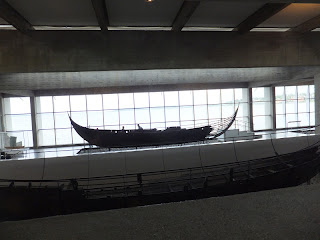 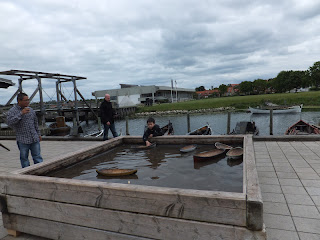 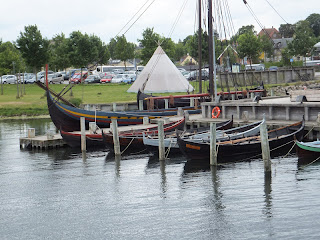 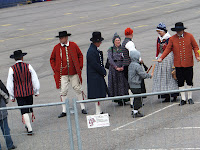 We arrive back at the pier close to our sail away time, and were pleasantly surprised to find villagers in traditional garb waiting for us.

They performed several old Danish dances for our entertainment as we prepared to leave the port.

The large cruise ship was scheduled to pull out just before Star Flyer, and another school band had been sent to wish us farewell. 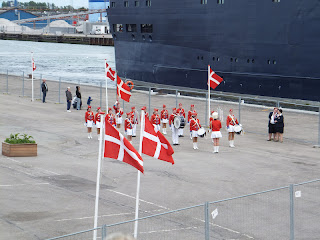 Janet O. said…
My DH is of Danish ancestry. We have many stories of his people before they came to America. Would love to go there someday!
Wednesday, June 13, 2012 8:17:00 PM