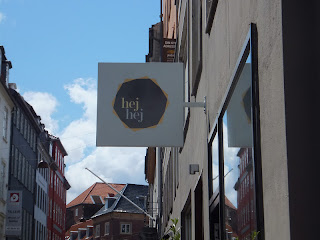 The first thing we learned to say in Swedish was "hej hej (pronounced 'hey hey')," which was how we were greeted in shops and restaurants. We were delighted to be able to respond in kind!

Of course, this led the other person to believe us to be Swedish (well, of course!) and she would begin to tell us something or another, until we would respond, "We speak English," and then seamlessly, she would roll over into English. 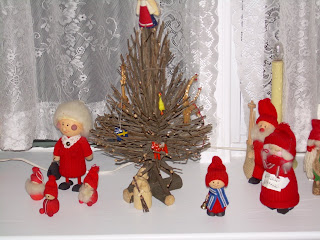 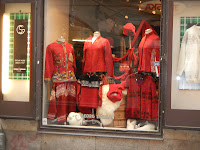 Sherry teased me before we went to Sweden, saying I would be disappointed that people weren't wearing little red sweaters similar to our Swedish Christmas decorations.

They weren't wearing them, but I wasn't disappointed. After all, it was June!  I knew that they had them packed away.

And in case they needed more, this shop was where they could be purchased! 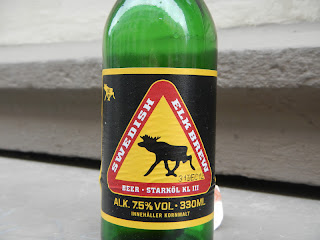 On the day we drove north to Dalarna, we saw many traffic signs that were yellow triangles with a big picture of a moose -- warning us that moose were likely to cross the road in this particular spot. We never saw a moose, crossing the road or otherwise, and we never managed to get a photo of one of the signs. But Joe was kind enough to take this picture of a beverage he enjoyed. Close enough! 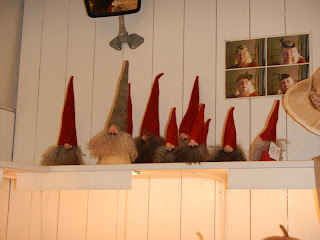 Some natives we encountered . . . 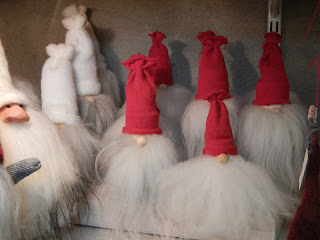 But I'm ending this way, because I hope someday to be saying it again, back in Sweden.

Jindi's Cottage said…
Hej Nancy...it looks like you've had the most wonderful time...such a lovely tour of Scandanavia...I've just done the whole tour in one sitting (as I've been sick with a cold and the brain cells weren't operating on a high enough level of function to take it in before now)...of course the red jumpers are just packed away for Summer I'm sure!...
Monday, June 18, 2012 6:30:00 AM