To Falun and Back 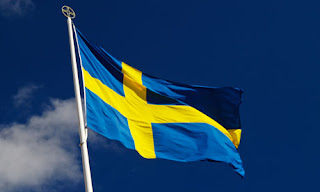 For about as long as I can remember, I've felt a tie to Scandinavia. It probably began when I was a little girl and watched a weekly television program about a Norwegian immigrant family, "I Remember Mama." Later, when I met Joe, we discovered Danish design for the home. And when we joined our Lutheran church and learned about the festival of Santa Lucia, the 30-year-old attachment to Sweden began. I've dreamed of visiting Sweden for so long, that somehow in my mind I became Swedish, and needed to return to "my homeland." Family and friends have teased me about all of this, but with little impact. I never thought, though, that I would ever actually "go home." The costs and logistics of a such a trip seemed to be beyond us.

About a year and a half ago, I noticed that Star Clippers, the sailing cruise line that we had taken to Greece five years ago, was starting a new route to the Baltic Sea. Star Flyer was actually going to Sweden! Literally trembling with excitement, I shared the news with Joe and the decision was made. With the help of my terrific cousin, a travel agent, planning began.

We left home on May 24, and returned two weeks later, on June 7. It was the trip of a lifetime, and the upcoming entries on this blog will be a detailed account of our journey. I hope you will want to accompany me as I remember this wonderful experience.

Synthia said…
My grandfather immigrated from Sweden and from the time I was very small I wanted to go there. That was the first trip we took after we retired. We spent three weeks in Sweden in September of 1999. It was everything and more than I dreamed of. I'm so glad your dream came true also.
Saturday, June 09, 2012 10:03:00 AM

Dogwood Lane Rambles said…
Fabulous! So glad baby girl arrived in time so that you could make your trip and not miss seeing her too.
Saturday, June 09, 2012 12:13:00 PM

Jindi's Cottage said…
Welcome back...Scandanavia, especially Sweden, is the one place I have always wanted to go...I am looking forward to journeying there via your posts...
Sunday, June 10, 2012 5:59:00 AM

Salem Stitcher said…
I am now caught up with your incredible trip. Reading these entries, I have been awed by the photos, warmed by your joy in this trip, entertained by Joe's poses in some of the photos (standing as part of the sculpture was my favorite). But the best part was when I cried when you crossed into Sweden and Joe said "welcome home". Shoot, I'm crying again!