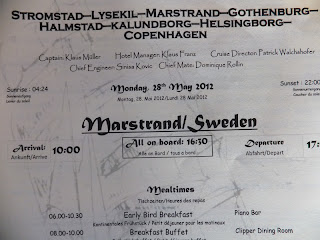 Late each afternoon we received a program for the following day; it provided the times of events and excursions and other important information passengers would need. If you look closely, you can see that on America's Memorial Day, the sun rose in Marstrand at 4:24 and set at 10:00, making it a very long day.

In each port, excursions (at an additional cost) had been arranged. We seldom signed up for excursions, preferring to be on our own in exploring the town. Because the cruise was undersubscribed, sometimes there was difficulty reaching the minimum number needed for the excursion to run, and it would be canceled. In one port two excursions were offered; when the one we'd selected was eliminated, we quickly jumped onto the alternative. 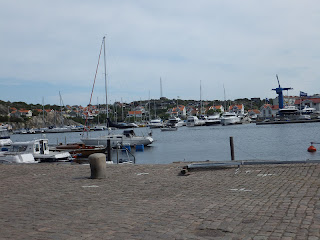 Marstrand, Sweden was probably my least favorite port. It is a resort sort of town, the home of a prestigious sailboat race that will occur in a few weeks. The things in the shops were even more expensive than we'd seen in other places.

It was a pretty place, though, and we chose not to return to the ship for lunch; instead, we stopped at a local fish and chips stand and lunched at the waterfront. While we were eating, we saw a sight that reminded us of someone we'd left at home. 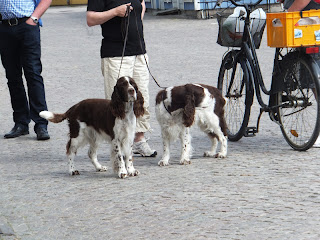 Look! In Sweden, English Springer Spaniels don't have their tails docked as they do here!

What to do with Blackberry was had been a major consideration as we planned for our trip. Fortunately, our good friend Bill actually asked if he could keep him, and we were delighted to accept this lovely offer. We didn't see a lot of dogs in Scandinavia, and most of the ones we did see were small, whitish, fluffy ones.

Here are some random shots of Marstrand: 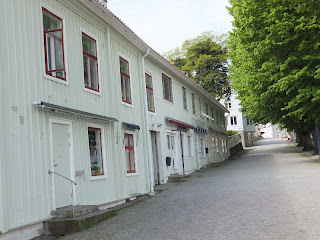 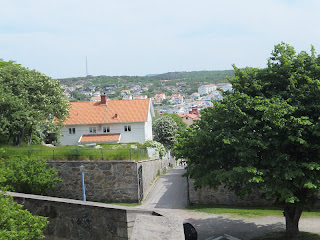 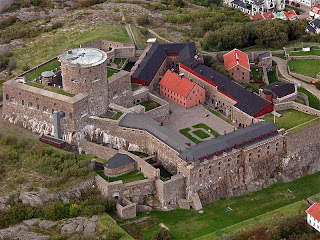 The town's major attraction, Carlstens Fortress, is set high on a hill, and is absolutely massive. After climbing up, we decided to forego the cost of admission and just wander around outside. After a bit we found ourselves inside the grounds and while I was resting and Joe was exploring, some landscapers came along and closed and locked the gate where we had entered! We were prisoners inside this seventeenth century fortress!

Without a map of the place, we made a few false starts at finding the way out, but eventually we found ourselves back at the entry way. We told the woman at the desk what had happened, and reached for our kroner to pay the cost of admission. She laughed and graciously said, "Well, maybe I don't know that this happened!" and sent us on our way.  I did not take the above photo of the fortress, but I did take the ones that follow. 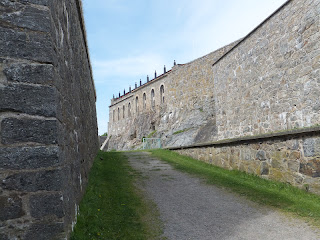 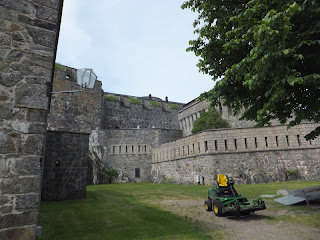 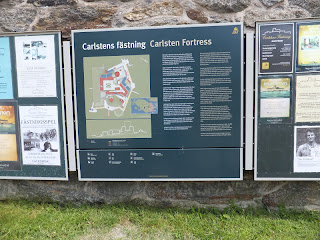 And Joe took this one: 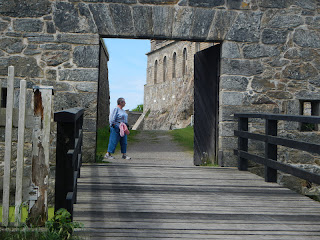 Alyssa said…
My mother-in-law lives in Sweden. It's a beautiful and peaceful place, she said. Thanks for sharing this beautiful photos, I would love to visit there one day. :)

Denise in PA said…
Oh my, you got locked in - LOL! Glad that all worked out (and that you didn't have to pay!) So glad that you found great care for Blackberry. The furry ones are always a worry when you are away. I know, having a small whiteish fluffy one of my own - LOL!
Tuesday, June 12, 2012 1:45:00 PM