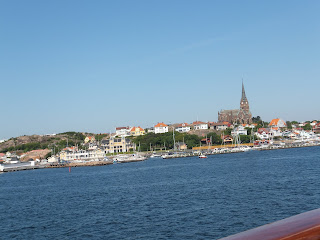 Sunday was scheduled as a full day at sea, but instead we pulled into a very small port, Lysekils, Sweden, right after lunch. This photo shows the first glimpse of Lysekils. As soon as the ship was cleared, a representative from the town came aboard and distributed maps of the village. This turned out to be the case at every single port; a real godsend since most of them were scarcely mentioned in the guidebooks.

Being Sunday, the few shops were closed. The big commercial attraction was an aquarium but we chose to wander around the town instead of paying a visit. 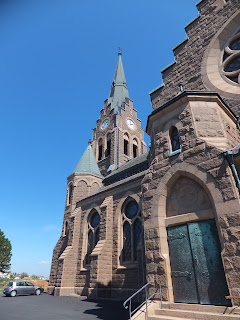 For us, the major attraction was the church, high on the town's main hill. It was fairly warm that day, and we trudged around the cobbly streets until we reached the top, only to find that since we had missed morning services, we could not get inside. Joe tried every possible door, but it was useless. The doors were extremely heavy and made of copper, prompting my sweetheart to say, "Well, nobody's going to nail anything to these church doors!"

We would end up visiting or photographing at least one church at every port stop. The denominations were mostly unclear. We believed that they were initially Roman Catholic, judging from when they were built, but were now Lutheran, representing the state religion.

There wasn't a lot to do in Lysekils, but we didn't care. We enjoyed looking at the homes and I noticed that many of them had large windows without curtains, believing that the inhabitants valued sunlight more than privacy. This was understandable, considering that the latitude in most of Scandinavia led to very, very short days in the winter time. Following are some pictures of the scenery in Lysekils. 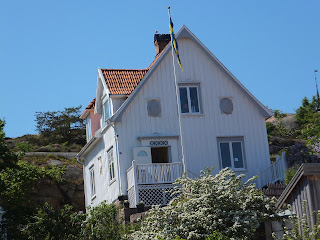 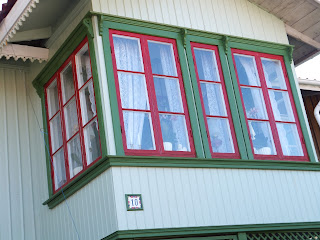 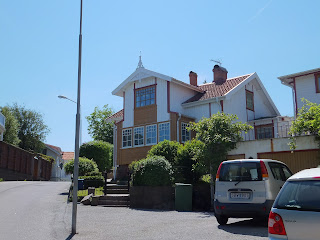 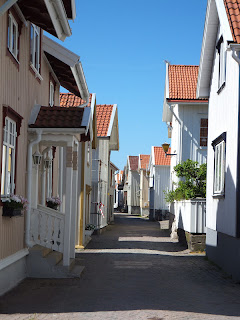 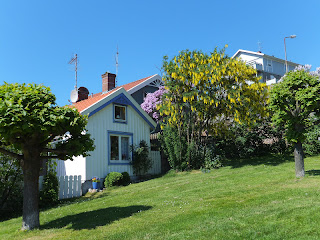 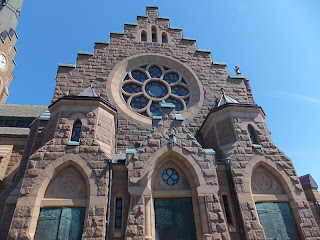 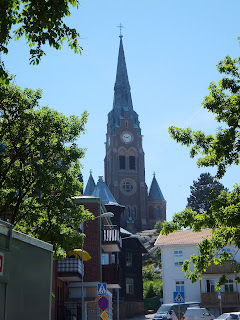 Soon it was time to return to the ship for a nap before dinner. After eating, we went back up on the deck for the sail away. Since we were visiting in the summer, the day was long and this photo of sunset was taken well after ten o'clock. 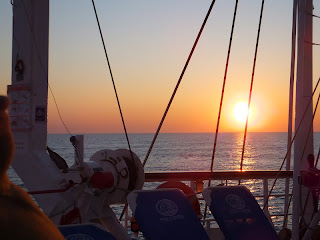 Pati said…
I am really enjoying your visit through your camera and commentary! This area of Europe is on my bucket list to visit. Hope you are doing well!
Monday, June 11, 2012 8:36:00 AM

Three Birds Inspired said…
I love it when people don't have their curtains drawn. Yes, I am a window peeper...I mean I don't go up to the house and look in but if your curtains are pulled back and I can see inside your living room, I am gonna look! Love all your photos. Everything is just so perfect!
Monday, June 11, 2012 8:59:00 AM

Mrs. Goodneedle said…
Gorgeous photography, my friend. Your port of call had me scurrying for my atlas. What a positively charming village this one is!
Monday, June 11, 2012 9:42:00 AM

Quiltdivajulie said…
Wonderful photos - and I appreciate your sharing of your reactions and thoughts and observations. Lovely!
Monday, June 11, 2012 10:16:00 AM

LizA. said…
Oh, what a great little town! I love the picture of the narrow street with white houses on each side. Here in the Seattle area we are much farther north than you would expect and at this time of year the sun doesn't set until after 9:00. It took me years to get used to it after having grown up in the NY/NJ metro area.
Monday, June 11, 2012 12:03:00 PM

Janet O. said…
Seems so quaint. I would almost expect to see a PBS series located there. : )
Love Joe's comment about the door--especially if Lutheranism is the state religion!
Monday, June 11, 2012 6:47:00 PM