Farewell to our Home on the Sea 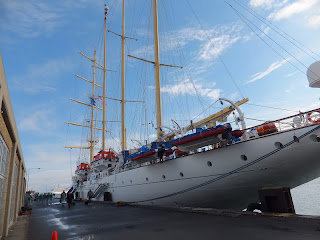 On Saturday morning our week aboard Star Flyer came to an end. Before disembarking, I'd like to take one more look around our home on the sea. Star Flyer holds a maximum of 170 passengers; as I mentioned earlier, there were fewer than 80 aboard for this leg of the journey. Interestingly, there was a film crew from the BBC making a documentary about the trip. And there were a couple of dozen Germans traveling in a group. Beyond that, we were mostly Americans and Englishmen. 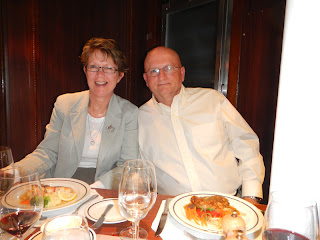 We met the Millers our very first night on board. They were back-to-backers, having spent the previous week following a different itinerary. Upon the ship's not being able to get into Oslo, they had taken the bus there from the port in Sweden, and spent the day. They arrived back on the bus with us, and had helped us to consume the champagne we had been gifted. Easy to be with, Martha and George are actually from Not Far From Philadelphia, and have lived in Florida for many years. We had dinner with them most evenings, and enjoyed their company so very much. I wonder if Martha will actually read my blog . . . . 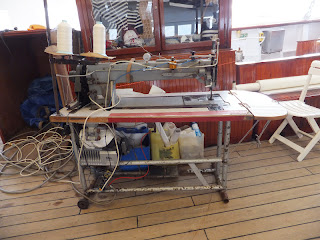 My third trip aboard a Star Clippers vessel, and I still haven't had a conversation with the sail maker! It is important, I think, to leave something for the next trip.

I think even I could manage to do machine quilting with the long arm on his machine! But his thread is very, very thick. While we were on board, he was spending time making patches and applying them to the mainsail.

Joe alleges that he has seven teeth. 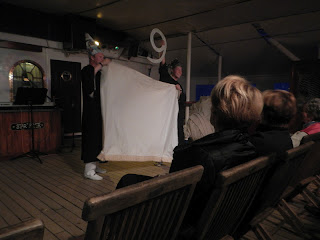 Earlier I mentioned the low-key quality of the evening entertainment on deck. One night was talent night, featuring a variety of acts performed by passengers and crew. Joe had reproductions of some of his sketches up on the white board.

The most enchanting act was a pair of hilarious well-dressed but minimally talented magicians, members of the ship's water sports team. Here they are shown, delighted with themselves, after mysteriously turning a "six" into a "nine." We loved it. 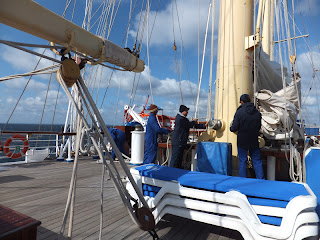 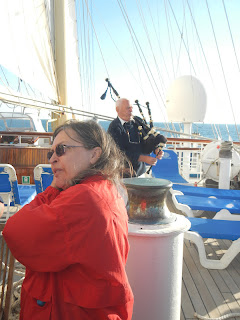 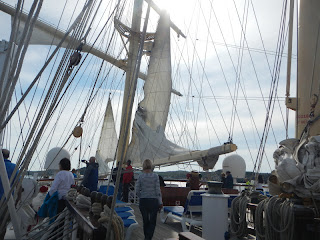 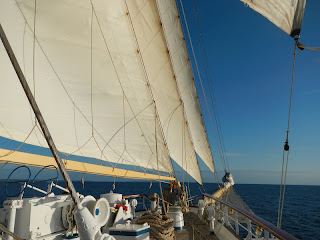 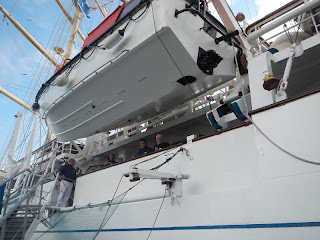 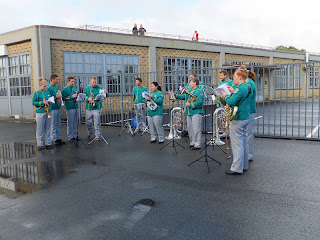 All too soon our week at sea has come to an end.

We pull into port early, early on Saturday morning, only to be met by another band, this one playing that lovely song from the Hans Christian Anderson movie, "Wonderful, Wonderful Copenhagen," and lifting our spirits with the reminder that the next leg of our adventure is about to begin!

Lori said…
It must have been a little sad to have that adventure over..Looks like a wonderful trip aboard the Star Flyer!!
Thursday, June 14, 2012 9:30:00 AM

LizA. said…
What a GREAT way to vacation! I used to race sailboats in another life (younger days, back in the Hudson River valley), so I know I would enjoy a vacation like this. Must put this on my bucket list. Thanx for sharing.
Thursday, June 14, 2012 11:57:00 AM

Janet O. said…
What a lovely week, Nancy! I love this, as opposed to the large, impersonal cruise. After mentioning your experience to DH I learned that he has always wanted to take a river cruise somewhere in Europe. Different thing, I know, but still a smaller, more personal experience.
Thursday, June 14, 2012 12:54:00 PM

Tanya said…
I have a friend who will be making a trip to Norway and Sweden next week. I'll direct her to your blog!
I like that sail maker's sewing machine! It makes sense that they would need a special machine but it's the first time I've ever thought about it.
Friday, June 15, 2012 7:53:00 PM