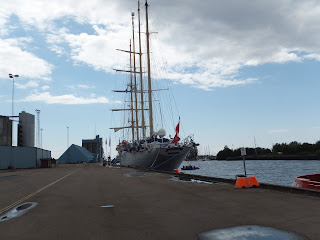 Hesitantly, we entered the makeshift waiting room behind the Star Clippers banner, and we were greeted by the Cruise Director. Patrick told us that due to a ship pilot strike in Oslo, Star Flyer had been unable to dock there. This had necessitated a change of plans. We know that dealing with sailboats requires flexibility, but we surely hadn't anticipated this! Star Flyer was docked in a small port in Sweden, Stromstad, and if we would wait for a bit until the last of the boarding passengers arrived, a bus would take us there! Joe decided to climb up and visit a castle close by, and I settled in with my book. Soon we were on a bus; instead of sailing down a fjord, we were traveling through the countryside of Norway and Sweden. As we crossed the line between the two countries, Joe said to me, "Welcome Home." 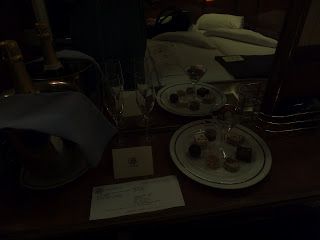 Star Flyer was a welcome sight, and we eagerly climbed aboard. In our cabin we found a bottle of red wine and tray of petit fours from my cousin and a chilled bottle of champagne from Star Clippers. We hurried down to dinner with the champagne -- we don't really care for it, but we sat with two other couples who felt the same way but decided to make the sacrifice of helping us put it away. We didn't linger over dinner, for ten o'clock was sail away time and we didn't want to miss that. It is very beautiful and moving, as the sails are raised and the ship glides out of port with glorious music playing in the background. 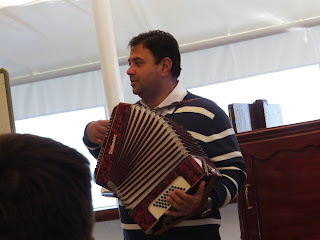 Star Flyer holds at most only 170 passengers and on this particular voyage there were fewer than eighty, so it was an intimate environment. She is different from the large cruise ships -- no casinos, no name entertainment, no orchestra and dancing. Instead there is a pianist/accordionist who plays in the Tropical Bar and Piano Bar, and entertainment in the evening includes things like a fashion show from the ship's shop and a talent show featuring crew and passengers. We usually were too tired to go up on deck for the entertainment, preferring to relax in the cabin and turn in early. This was a necessity for Joe, who was compelled to rise with the sun and go up on deck to watch the views as we approached ports. 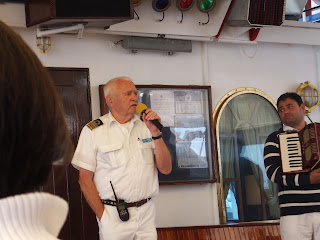 The ship's crew comes from many, many different countries. All speak English and most speak German and French as well. Announcements and printed bulletins are done in all three languages.

In the past, the ship captains have been somewhat austere, strictly business.  Captain Klaus, a German, was a contrast: warm and personable and even a little bit funny. He played his bagpipes for us several times (wearing his whites, not a kilt) and on Sunday morning arranged for an interfaith worship service, a first for us aboard a Star Clipper ship.

The next photographs show a little more of the ship, looking up at the flags (in port, the flag of the current country is flown as a courtesy along with the Star Clippers flag), Joe climbing the mast, Joe in the crow's nest, and finally the flag of the country of ship's registry, Malta. 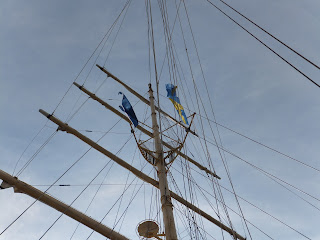 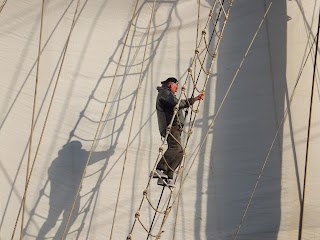 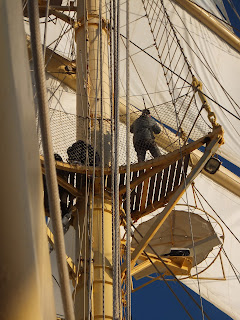 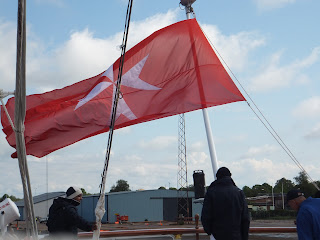 Sunday had been scheduled to be a full day at sea. But since the ship hadn't been able to get into Oslo, another port had to be added so they could take on water. We found ourselves heading into the charming village of Lysekil, Sweden for the day.