Basket in a Basket 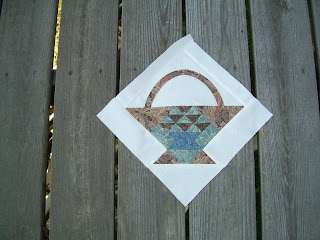 It was inevitable, I told Piecemeal, that sooner or later I would have to try making a basket on my own.  Well, it turned out to be sooner.

I had my idea on Saturday and started working on it that night.  Sometime on Sunday I finished it and wasn't totally pleased.  The base was funky.  and I'd used the same background for the mini-basket as I had for the main block.  I sent it off to Piecemeal and said I thought perhaps a Baker's Dozen baskets would be a nice thing and to have a go at my idea.

She wrote back with a suggestion or two, and I went back to work and viola!  my block is finished and I like it very much.  The next time I make it, however, I will make that bottom middle segment the same color as the main basket base. 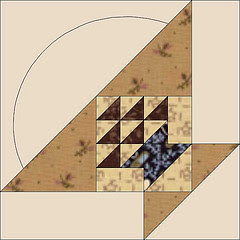 Meanwhile, during the night, Piecemeal got to work and, speed demon marvel of efficiency that she is, her finished block was up on her blog this morning.  And it is, of course, magnificent.  She's drawn up the directions for it, and her construction method is a bit simpler than mine is.

But, you know what?   I like the way mine has more background.  And I love my appliqued handle.  Two very, very nice baskets, and related to each other:  Piecemeal's #13 is a cousin to my #13.  And that is way cool.

A week from tomorrow I'll have the four remaining indigo and caramel versions of Piecemeal's blocks from Mary and Judi.  And on July 9, I'm headed out to White Oak, and guess what I'm going to put together!

Me, Jane said…
I've so enjoyed following your basket-making and look forward to seeing all the blocks combined in their respective quilts. You (and the talented Piecemeal) have inspired me to give baskets a try!
Monday, June 21, 2010 7:29:00 PM