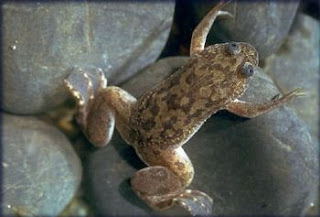 Long-time readers of the blog may remember that each year someone from Lower School science department comes to spend the summer with me.  The first year was the best, when we had Fig, a wonderful little newt with a lot of personality.  Another year we had a delightful anole, and a different year we hosted four fire belly toads that were filled with energy.  Last year our guest was Watch Your Fingers, a baby snapping turtle, who later on was set free in the wooded stream area adjacent to the campus.

Well, friends, this year we have * (The Frog Formerly Known as Prince), who is an African clawed frog.  The picture isn't * himself but rather an internet photo.  He's kind of dirty, and ugly, and frankly, I haven't made a real good connection with him yet.  For some reason he puts me in mind of that dirty old man, Tyrone F. Horneigh, played by Arte Johnson, who used to harrass Gladys Ormphby on the park bench in Rowan & Martin's Laugh-In.

If he offers me a Walnetto, I'll be sure to post about it.

altar ego said…
He does look a little creepy, I understand the lack of connection. Are you working on a name, or holding a contest for it? You're a better woman than I to take in these critters. I stick to puppies.
Tuesday, June 15, 2010 7:07:00 PM

ROTFLMAO at Walnettos! Should I send the little toad this link?
http://www.oldtimecandy.com/walnettos.htm
Tuesday, June 15, 2010 10:41:00 PM

Guenveur in Kent said…
He has quite a nifty quilt pattern on his back. Think about it. He's sort of a light caramel, too. Nothing like a toad quilt for those cold winter nights.
Thursday, June 17, 2010 3:19:00 PM