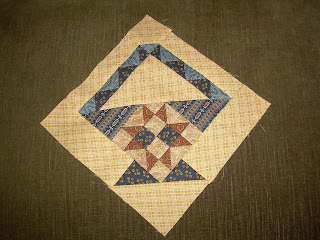 Honna and I have had Barry Manilow waiting in the wings for not only years, my friends, but for decades. Our thought was that upon the completion of some mammoth and impressive achievement, we'd have Barry come on stage and belt out "Looks Like We've Made It."  We scheduled him for Honna's master's degree and my seminary graduation, but apparently he had a conflict because he didn't show up.  We knew he wouldn't disappoint us if either of us ever got to our goal weight, but we've not been able to put that to the test.  Yet.

So here I am with the last of Piecemeal's blocks, the 25th block for my indigo and caramel  basket quilt (turns out I only need 24 for the lay-out, so Basket of Chips is likely to end up on the back).  This block was far from simple, but it is finished.  The new method for the handles that Piecemeal devised worked like a dream.  Where I ran into the most trouble was in stitching that long horizontal seam, the one that affixes the basket bottom to the handle half.  My measurements didn't quite match Piecemeal's, and I had to fudge just a tad.  But it's together.  And I like it.  I like it quite a bit.

Come on, Barry.  Join Piecemeal and me on the stage.

Pat said…
FLAT OUT GORGEOUS!!!!! Piecemeal's design, plus your fabric placement and execution (not to mention chutzpah), make this block sing, even if Barry doesn't.
Saturday, June 19, 2010 8:57:00 AM

Anonymous said…
I'm doing a happy dance in my chair right now - your block is bee-yoo-tiful! I think this is my favorite of yours yet. The color choice and placement is wonderful. The star stands out without overpowering the block, and the handle... yes, the handle is perfect.
(When I saw the title, I was afraid the song reference would be "Send in the Clowns!")
Saturday, June 19, 2010 9:31:00 AM

Raewyn said…
What a beautiful block.....I am looking forward to seeing them pieced together... I'll be back to read your blog more thoroughly and check out these Piecemeal blocks!
Saturday, June 19, 2010 5:34:00 PM