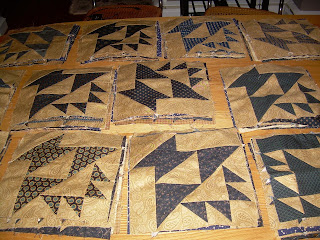 Joe had a long Synodical meeting this weekend.  It began on Friday around four o'clock and ended late on Saturday night.  Left to my own devices, I had a busy Saturday.

On the mundane side, I did a lot of laundry and filled and emptied Blackberry (who, incidentally, has grown bigger and produced more freckles than he had on the day we met him).

On the fun side, there were all kinds of things.  First, Helen came to call early in the morning.  She was delivering her Indigo and Caramel basket blocks, which were just lovely.  Since the full swap blocks were all in, I did the swap out and got the bags ready to put in the mail on Monday.  In another week and a half, I'll receive the side swap blocks from Mary and Judi, and then I can think seriously about putting this quilt together into a flimsy. 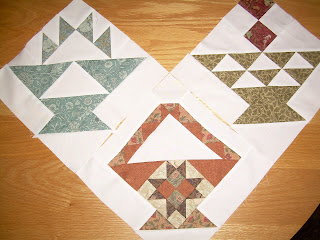 I got to thinking that if I was going to make a Basket for Bill out of Piecemeal's intricate #12 pattern, I'd best do it immediately while it was still fresh in my mind.  This one went together a little more easily than the first one did, but I still had a fudge factor when doing that long horizontal seam.  I like this block, but it isn't my favorite, and it isn't likely I'll make it again.

Went out to lunch with Honna and made two more Blocks for Bill.  Coming into the home stretch on this project, now, too.

So it was a good day.

My son was also at the synod meeting as he is on the staff of the camp located in the area. He said they went to the meeting briefly to be introduced to the delegates.
Sunday, June 20, 2010 3:21:00 PM