A Lovely Day, Despite the Heat 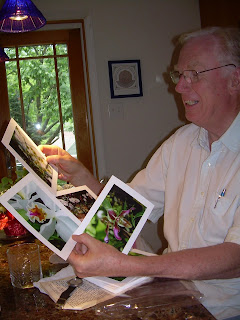 Here's Himself, looking at a gift he received from me and from Altar Ego.  She had a give-away on her blog recently -- a collection of beautiferous cards featuring orchid photographs.  And I was fortunate to be one of the winners.  I told her in my entry that I would share them with Joe, as he has a small collection of orchids.  Wasn't it generous of Altar Egoto give these beauties away?

She's a nifty sort of a woman,always with lots going on in her life.  Right now she's collecting tracings of hands on fabrics -- she has plans to make a sort of "laying on of hands" quilt for use in her congregation.  I think it's a splendid idea; one that might be on my eschatological projects list, because there are so many on my regular list!  Today when Sherry and her family come to meet Blackberry, we're going to do our hand tracings so we can get them in the mail to her.  If you feel inclined to give her a hand yourself, I know she'd appreciate it.  Leave a comment on her blog and she'll send you the mailing address.  Or, if you're someone I know, love, and/or trust, you could weasel it out of me. 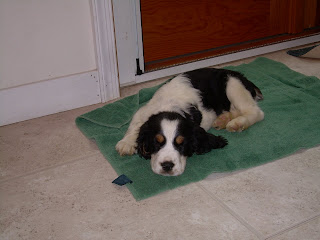 Speaking of Blackberry, thank you for all of your good wishes.  I'm delighted to report that his malady appears to be over!  He slept like a log last night -- from 10 until 5:30 and woke up feeling much more chipper than he was yesterday.  We kept him on the Sick Dog Meal today, since we already had it made, but he hasn't been sick.  At either end.  All day.

He doesn't look too lively in this picture, I know.  Because he's had a busy day.  He and Joe did some gardening this morning as well as some intense ball playing, and then mid-day he helped Joe make a batch of bread.  His version of help was mostly staying underfoot.  But help is help.

Hey -- take a closer look at the top picture, the one of Joe and the orchid cards.  See the "bread" print in the background?  It was a gift from my Secret Sister a year or two ago.  Before Joe started making bread.  I just love how that worked out! 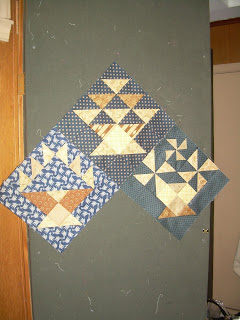 My day's been pretty busy, too, though I'm not about to compete with the guys in my household.  It's a muggy day, and we put the air-conditioning on, which really helped.  Especially with the bread making going on.  I spent several hours downstairs in my studio (oh, what a glorious name for my corner of the lower level!) making these three blocks from Piecemeal's site for my Indigo and Caramel quilt.  I'm nearly there.  Next up are the three with the caramel background from Piecemeal's, and then the Basket of Chips, and then I believe I'll be done.  I was looking at the setting that Piecemeal proposed, and I'm not sure whether to use it or not.  I had another setting in mind, but I'm going to use that one for Bill's Baskets, so perhaps I'll ponder the setting of the I&C baskets a bit while I finish them.

Well, the family will be here any time now.  So it's into the shower for me and then setting the table, and oh what a lovely ending to a day that has already been splendid!

Pati said…
Blackberry is adorable!!! I'm glad that he is over his malady. It is never fun when our babies are sick.

altar ego said…
Glad to know the cards have arrived and are in good hands! And I'm especially glad to know that Blackberry is right as rain. I can just picture that little cutie doing all the activities you describe, especially the underfoot part, ha ha!
Monday, June 14, 2010 12:22:00 AM

Pat said…
We spent a good bit of yeasterday with my sister & BIL's two springers, Deuce and Zoey. While they loved me up (boy are they affectionate dogs!!), I told them all about Blackberry, and will be sending his picture to them. They send their regards.
Monday, June 14, 2010 9:00:00 AM