It's That Time of Year 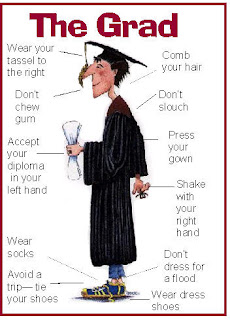 It's been a busy week here Near Philadelphia.  No time to blog.  Barely getting done all of the things I need to do, much less the things I want to do.  All of those end-of-the-year activities at school combined with the busyness of having a new puppy in the house have plum wore me out!

It's been twenty years since Joe and I have had a puppy, and  we are both utterly smitten with this little guy.  Neither of us has much memory of the puppyhood of the three other dogs we have had in our nearly 43 years together.  There were two previous English Springer Spaniels and one Cocker Spaniel with an attitude, and now this darling little guy, Blackberry.  We're so in love with him that we don't even mind getting up to take him out during the night.  If you've heard reports of a gray-haired woman in a bathrobe and bright pink Crocs out on her lawn being silly in the wee hours, well, you know who it is.

Commencement at the Quaker school where I work is tomorrow evening.  It is a lovely affair, held out in the grove by the meeting house.  We have about 60 graduates this year and it has been lovely watching all of the traditions unfold again as the seniors hand over the leadership of the school to the juniors.  The diplomas are all signed and tomorrow morning I'll put them inside their cases.

The public school at the end of our street held its Commencement tonight, having postponed it from last night due to rainy weather.  They probably had about ten times the number of graduates that we have!

The other morning as I was driving to school, the classical radio station I listen to in the car began to play "Pomp and Circumstance," and it wasn't finished when I pulled into the parking lot.  It didn't seem at all right to just turn the radio off.  So I sat there in the car, listening to the rest of it, and felt all sentimental, thinking of all the new beginnings that I've witnessed, participated in, and heard about.

LizA. said…
In case you haven't heard about it, check into clicker training for Blackberry. It's amazing, easy and most dogs respond very quickly to it and you can start him now.
http://www.clickertraining.com/
Friday, June 11, 2010 12:25:00 AM

Mrs. Goodneedle said…
We used clicker training with Hannes, too. Best wishes to the bleary-eyed new parents! I can't wait for more photos.

Anonymous said…
I heard the song in my head the moment you mentioned it, however, when I tried to sing along, all I could manage was what I played when I was in junior high - the part of the bassoon. Basically it's just a very deep Buh Buh Buh Buh Buh Buh.
Friday, June 11, 2010 8:58:00 AM

Salem Stitcher said…
I'm going to be hearing P & C in my head for the rest of the day now...which, strangely enough is not annoying at all. Matter of fact, it makes me smile.

Denise in PA said…
I laughed at you out in your bathrobe and clogs with the puppy - that's me with our Lilly. I always think "the poor neighbors" - LOL! The little pups bring such joy don't they? I know ours is one of the lights of our lives o:) I hope the graduation ceremonies go splendidly!
Friday, June 11, 2010 10:26:00 AM

altar ego said…
I'm so glad you're besotted with Blackberry. That is at it should be with a wee one on four legs. I'm still taking the one-who-is-no longer-a-(chronological)-puppy out--she just won't get trained! Very frustrating and my husband is beyond tired of indoor messes. I need to look into clicker training. I have never had this kind of trouble with other dogs.

More importantly, I hope you have a stellar evening of graduate activities and traditions. For various reasons memories of my own graduations are tinted by other things.
Friday, June 11, 2010 10:35:00 AM

Pat said…
One could not even manufacture 2 better, more perfect days here, near Philadelphia, for Commencing than yesterday and today. Absolutely glorious! I will be humming P&C on the way back down Market Street to the train station this evening, doing the step-hesitate-drag foot-step as I go.
Friday, June 11, 2010 1:39:00 PM

Nancy said…
our son graduated with 429 in his class... they all texted while they were waiting for their names to be called...

Our daughters graduated with much smaller groups...60 and 56.. and of course they didn't even have cell phones then...