Reaching My Level of Incompetence 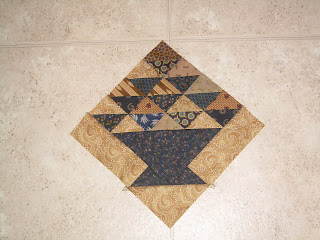 Does anyone remember a book from back in the Sixties called The Peter Principle?  The premise was that in any hierarchy, a person was promoted until he reached his level of incompetence.  As long as he was competent, doing well, he'd be promoted.  But ultimately, he'd reach the point where he was incompetent and at that point promotions would cease.  The treatise was supposed to be humorous, but I swear I've seen it in operation in many, many venues.  Don't get me started.

But not my quilting!!!  I took one look at Piecemeal's Block #12 and knew better than to attempt it.  I've never paper pieced, foundation pieced, or freezer paper pieced.  And, frankly, I've not had a hankering to learn.  (Although there are these blocks that Julie has been producing that make my heart beat faster.)  I know I can't learn from reading a tutorial; I'm a hands-on kind of learner.  Bobbi No Blog has offered to teach me basic paper piecing at White Oak next month, and I'm going to take a stab at it.  But right now, there are a few other basket blocks out there, and since I made Basket of Chips tonight, I only need the one more to have twenty-five.  Here's the plan:  I'll make one more block, as yet to be determined, next week sometime.  And I'll take my blocks along to White Oak along with fabric for Piecemeal's #12 and if the lesson from Bobbi NB goes well, if I'm a competent learner and paper piecer, I'll attempt #12 right then and there.

It's not as if I could set the blocks yet anyway.  I need to go to Sauder's or Old Country Store for finishing fabric.

And, of course, I've still got Bill's Baskets up on my wall and many more of them to make.

I love to sew.

Anonymous said…
Oh no you don't! I've had so much fun seeing your completed blocks from my patterns, that I had to figure out how to do the handle without paper piecing. And wouldn't you know, I realized that the solution was just a couple of pencil lines. I'll be posting the alternate instructions for the handles in a little bit (and I'll email it directly to you).
(I can never refuse a challenge...)
Thursday, June 17, 2010 10:02:00 PM

Char said…
Good luck with the paper piecing. It does take some getting used to but I enjoy it.
I think I'll be taking a trip to Zooks and The Old Country Store myself in a few weeks.
Thursday, June 17, 2010 10:03:00 PM

Salem Stitcher said…
I'm sure you will conquer paper piecing with complete competency. It's tedious but worth it. Good luck!!
Thursday, June 17, 2010 10:12:00 PM

AnnieO said…
Oh that Basket of Chips turned out beautifully! It will be a gorgeous warm and yummy quilt.

I've heard some people say they always turn to YouTube for instructional videos for sewing techniques. Surely someone must have posted one on paper piecing...
Thursday, June 17, 2010 11:38:00 PM

Three Birds Inspired said…
Paper piecing is not my favorite method of piecing but you do get the most accurate, beautiful points. I just don't like the waste of fabric. Regarding a trip to Lancaster County for fabric, I will send you an email about a fabulous sale at the "new and vastly improved" Burkholders.
Friday, June 18, 2010 5:33:00 AM

Anonymous said…
I've also found paper piecing frustrating; my mind just doesn't seem to work that way. However, I still do Christmas ornaments each year using that method because for tiny pieces, it gives the best results. If you get any get insights about doing it, please share. It is a very useful skill that I just haven't totally mastered. (I rip out as many seams as I sew.)
Sue
Friday, June 18, 2010 9:48:00 AM

Judi said…
It was a good job I was sitting down when I read this post!

Nancy, I LOVE to paper piece and had no idea you had never been there.

If the talented Mrs Piecmeal had posted her PP basket sooner, I would have chosen to make it for our swap.

I could still make it, if you would like - or would you rather have the challenge of learning?