In Which Magnolia Has a Face Lift 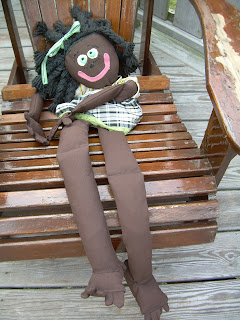 She's a lot older than you'd think, Magnolia is. I first met her in the autumn of 1975 when Tom was just a little more than a year old and we were expecting another baby in just a few months. I was so hoping for a little girl this time around.

Joe, Tom, and I had driven over to Evanston from where we lived in Schaumburg, and loved the town. We liked knowing that our new baby would be born at Evanston Hospital. It sounded like a nice place to be from. As we were heading back to the car, we passed a crafty kind of shop and popped in. And there she was. With her beautiful coiffure and engaging smile. I had to take her home.

As a child, Sherry never took to Magnolia. She confided to me recently that she'd found her "a little creepy." So the doll stayed in good condition. Awhile back I found her again, and Sam and Caroline were enchanted. Apparently they've played hard together, because a few weeks ago when we were up at Sherry's, we learned that Magnolia was nearly decapitated. Furthermore, the felt of her beautiful blue eyes and her broad grin was wearing off. She looked as though she'd seen better days. So she came home with me.

I recapitated her and then wondered what to do about her faded facial features. Since the pupils were intact and the whites of her eyes were still good, I decided that embroidery would fashion the irises. And Joe carefully traced her smile and I cut it out of some nice Cherrywood scrap that I had. I tell you, friends, it is a peculiar feeling to apply an iron to someone's face. Especially, I guess, to someone as unfailingly cheerful as Magnolia. But I clenched my teeth and did it. And then buttonhole-stitched it down.

So now Magnolia's good as new. She'll head home from the spa on Saturday. With a new hair ribbon for her bravery.

Janet O. said…
I'm glad Magnolia finally knows what it is like to be truly loved. Good job on the restoration. And I wish I could get a new face as easily--except the hot iron part.
Thursday, March 15, 2012 10:06:00 PM

Pat said…
Magnolia is wonderful, and even the most talented plastic surgeon would never be able to detect her facelift.
Friday, March 16, 2012 3:55:00 PM

Synthia said…
You did a marvelous job of rehabilitating Magnolia. Magnolia reminds me of my large, well loved, caucasian doll that my Aunt Eleanor made for me some 70 years ago. She is in very fragile condition now. Her name is Mergatory and I've always loved her dearly. I'm sure your ministrations will help Magnolia last for many more years.
Saturday, March 17, 2012 9:53:00 AM

AnnieO said…
She's darling! Wonderful that you doctored her up and made her good as new for the next gen. I still have the first sock doll I made when I was about 11 years old. Her name is Flower and she has black yarn hair and blue button eyes...
Sunday, March 18, 2012 12:58:00 PM