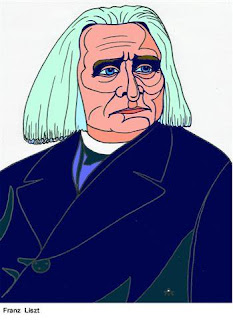 When I was in my late thirties, I discovered Franz Liszt. I couldn't get enough of his beautiful piano music. Nothing would do but I had to learn to play it myself. No matter that I'd had about two years of piano lessons from my sister when I was eight and never gone near the instrument again other than to belt out the first couple of measures of "Country Gardens" once in a while over the years.

I engaged a piano teacher and told her what I wanted to do. She raised an eyebrow, but for quite some time she came to the house every week and administered a lesson apiece to me and to Andrew, who was about eight himself and playing under protest. It was hard to tell which of the two of us was the worse in technique. Mrs. Drinell was a saint, however, who told me that it would be a little while before I could tackle the various Hungarian Rhapsodies; meanwhile, there were other small accomplishments I could strive for, such as a laboriously slow version of "Pomp and Circumstance" which Honna declared would be appropriate for some sort of a graduation at a nursing home where people were using walkers to process.

The key to success in piano, Mrs. Drinell professed, was scales and other exercises. She produced a book called "Hanon" and each week assigned me a different exercise (or two) to perfect. I stayed with it for a couple of years, eventually being able to play one very simple piece by Franz Liszt, and at that point I decided I'd really rather listen to Vladimir Horowitz.

A couple of weeks ago I began sewing garments after a many-year hiatus from same. I'd made a lot of things for the kids and for myself back in the seventies and early eighties. Some were more skillfully constructed than others. Speed rather than perfection was my mantra. Technique was not my forte. But we wore my creations until I discovered quilting and gave up clothing construction.

I've noticed that the dresses and things that I've made in 4T have gone together "seamlessly," without boo-boos, with straight seams, with nothing caught where it shouldn't be. There is a different quality to the work. Most recently I've begun a summery top for myself, cutting into a piece of dearly beloved William Morris fabric. It is a little bit on the complicated side, with a tiny ruffled inset at the neckline, and smooth armhole bands below fluttery not-really-sleeves. And it is going together beautifully. With even gathers, with straight seams, with perfect matching of pieces.

And it occurs to me that twenty years of quarter-inch straight seams in the Log Cabins and meticulous matching of points in the Rising Stars have been the sewing equivalent of the Hanons and the scales. Sewing clothing right now is a joy-filled experience, undergirded by an unfamiliar confidence. I'm just reveling in it.

Playing in the background, of course, is Lang Lang's new CD, "Liszt: My Piano Hero."

OT Quilter said…
I agree with Pat: a wonderful post. I'm tempted to go find my copy of Hanon and have at it. After I do some more sewing, of course. Thank you for your interesting musings.
Tuesday, March 06, 2012 10:51:00 PM

Brenda said…
Oh, I hated Hanon. But I did manage to stick out piano lessons for many years. I think you've developed great muscle memory for manipulating fabric and precision. I used to sew garments for myself and my kids, but I've given it up because I hate the fitting part. great post.
Wednesday, March 07, 2012 8:55:00 AM

You have good taste.

Paula, the quilter said…
The added bonus of making garments is they are done quickly in comparison to a quilt. Instant gratification.
Wednesday, March 07, 2012 12:31:00 PM

Judi said…
Interesting to note that the skills seem to go in both directions - I know seamstresses who take to patchwork like ducks to water!