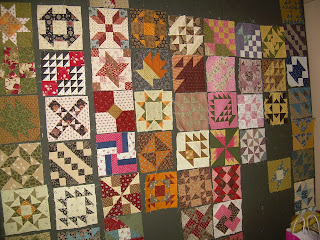 A couple of years ago, after I finished making my interpretation of The Farmer's Wife, I still had a lot of CW scraps. The initial complaints (of which there were many) about TFW notwithstanding, once I devised my own plan, I had a very good time piecing those little blocks. I especially liked choosing backgrounds that were interesting colors, because my tendency is to go to very light or black for backgrounds. So one time at White Oak I brought along my tub of CWs and my Around The Block books and aimlessly started piecing my way through. I started at the beginning and any block that was available in 6" finished, I made. This was great because it got me to make some blocks I ordinarily wouldn't do, either for degree of difficulty or lack of appeal. I've continued to make them sporadically. The other night I got them all out and stuck them up on the wall to see what I had. I've got an idea or two of how to set them, but it involves buying some fabric, and that is on hold until the next time the Executive Committee meets, prolly early in April. Yesterday the Usual Suspects gathered at the church for a day of sewing and I pulled out the Row Row Row Your Boat kit that I hadn't touched in a month. I worked from about eight until two and made some progress. When I came home, I put it up on my wall and continued in the evening. I'm going to need to stay on task with this quilt -- it needs to be all finished up by the time we go to Richmond to meet the new grandbaby. This quilt is for the Big Brother, Nate.

It's been an interesting experience, working from a kit. Ordinarily, I don't buy patterns, but just work from photographs or plans in my head. So it's a peculiar discipline following someone else's logic of how to put a quilt together. It's coming along, port to starboard, and I hope to have a progress photo to post tomorrow.

Janet O. said…
You have a wonderful collection of blocks there, Nancy. I'm interested to see what you do end up doing for the setting.
I have never made a quilt from a kit--unless you count the block kits I bought on clearance at JoAnn once for less than a buck a piece. I mixed up the pieces, redesigned some blocks, added some of my own fabric and pieced some sashing and borders. Does that count?
This looks like a quilt a little boy will love--especially since it is made with love by grandma!
Monday, March 12, 2012 1:40:00 AM

Salem Stitcher said…
I love the CW blocks very much! I've often thought about going through the Around the Block books and piecing all tge blocks. I love those books. The first one is my "go to" book.
Monday, March 12, 2012 8:50:00 AM

Judi said…
Love this post, partly for the gorgeous quilt blocks but also to learn that YOU have a Usual Suspects quilt group too!

MY Usual Suspects group comprises just five, and they are my closest and dearest UK quilting buddies.
Friday, March 16, 2012 2:42:00 AM