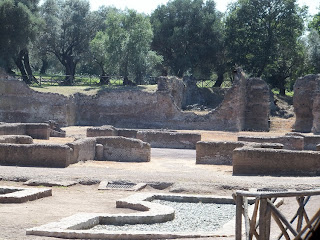 Royal Clipper docked at Citavecchia, the port of Rome, early on Saturday morning, and after sharing a ride with some of our fellow passengers, we arrived at Hotel Piranesi to find our room ready and waiting for us. The kind man at the desk said he hoped that we didn't mind: They had given us an upgrade! The room was beautiful and spacious, and we took time to unpack before going down the street to nearby Piazza del Popolo for lunch in an outdoor cafe. We didn't have a lot of time to loiter because we had booked an excursion! 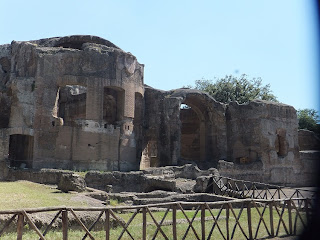 Joe needed to see Hadrian's Villa and nearby Villa d'Este, and soon our bus picked us up and we were off, with a delightful guide who spoke many languages. We arrived at Hadrian's Villa at about three o'clock in the afternoon, and it was very hot. Our guide told us to begin to walk up to the villa and she would meet us there. I looked to see the longest, steepest hill ever. Firmly planting one foot in front of the other, upwards we surged, with frequent stops to sip from our water bottles. I can't begin to tell you the scope of the place; the ruins were intriguing and abundant. Hadrian, an extremely wealthy man, had served as emperor of Rome for twenty years, and ordered many, many building projects, including the rebuilding of the Pantheon at some point. I walked around and viewed some of the ruins, but was tired and well aware that a walk down a steep hill needed to be approached with care, so I headed back to the coach a little before Joe. 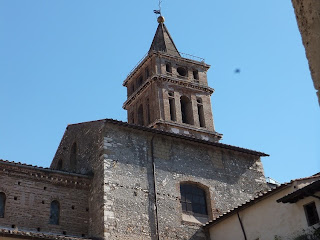 The bus ride to Villa d'Este wasn't very long, and when we arrived our guide indicated that we would be on our own in the gardens and showed us where to meet at the end of the excursion. The church adjacent to Villa d'Este was very pretty and I wondered if Joe would decide he needed to see the inside before we left the site.

We stopped to purchase new water bottles, having finished the ones we had taken to Hadrian's. Then we went in through the villa to the gardens. They are spectacular, and contain literally hundreds of fountains, water jets, pools, and other water features. 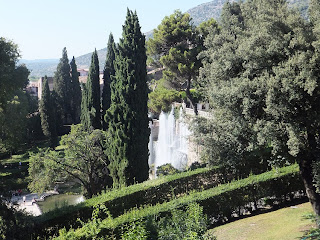 The best way to explore the gardens is to walk down flights and flights of terrace steps to the bottom. I believe I got about half-way. It is hard to describe the opulence and the beauty, especially considering that it was all created in the fifteenth century.

I want you to get an idea of the scope of Hadrian's Villa and Villa d'Este. I had been wearing my FitBit and logging about 10,000 steps and 15-20 flights of stairs (or equivalent in hills) each day, despite the temperatures being at or about 100 degrees. On this particular Saturday, at the end of the day, my FitBit showed 16,547 steps and 88 flights of stairs.

I slept well that night.

Janet O. said…
Wow, you really got around! Looks like you saw some amazing places. I love water features but in those temperatures I don't know how many of them I would have been willing to see. I don't do heat well. You were a trouper!
Friday, August 30, 2013 12:32:00 AM

Barbara Anne said…
For all the wonderful meals you and Joe enjoyed while travelling, you must have surely walked off more weight that you might have gained! Whew!!

Love the photos and those gardens must have been past astonishing considering their age. Fountains in working order after so many centuries? Incredible.

Thanks again for sharing this adventure with us!