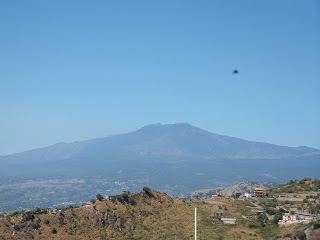 As our time aboard Royal Clipper drew to a close, we came to the southern part of Italy where we visited three ports. First was Taormina; from there we could see Mt. Etna.

Taormina was a relatively quiet place with some beautiful buildings and not a lot of activity. We liked it. We visited two churches and at one point I watched a gorgeously dressed young girl posing for photographers against the scenic town. My guess was that these pictures would appear in an Italian magazine. 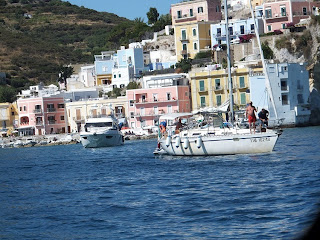 Next came a place we'd heard about since about for ever: Capri. We learned that the correct pronunciation is actually KA-pri and as we drew near we could see how lovely it was, with all of the pastel buildings climbing up the hillside. To get up to the top, we had to take a tram.

Once there, I found that Capri was my least favorite port on our trip. There were more people there than we had encountered anywhere else. The streets were crowded to the point of sometimes being impassible. Everywhere were ultra expensive shops with very famous names: Prada, Ferragamo, Armani, for example; stores I had no interest in and certainly no budget for.

We had a late sailing that evening, and some of our shipmates stayed ashore and had dinner high up in Capri; they said that once the crowds had dissipated and the sun had gone down, it was actually very, very lovely.

We did discover some beautiful flowers growing in Capri; they came in pink . . . 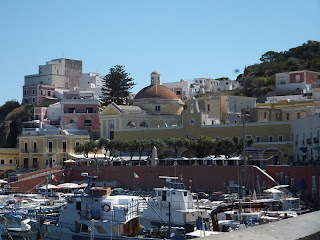 Finally we come to Ponza! As unimpressed as I was with Capri, Ponza was simply delightful: a pretty seaside town on a hill.

We wandered around, seeing the sights, exploring the shops, and loitering for a long, long time at a hilltop cafe sipping iced tea and looking down at the water, the bustle of activity on the docks as huge ferry boats came and went, and gazing fondly at Royal Clipper at anchor.

Our time on Royal Clipper was growing very short indeed. All too soon we would bid farewell to the captain, the crew, our charming stateroom, and the wonderful friends we had made. We would be pulling into port the next morning, ready for the final phase of our adventure!

Janet O. said…
Fascinating journey, and I am thrilled to come along. How long were you traveling? Seems like you have seen so much!
Wednesday, August 28, 2013 6:33:00 PM

Quiltdivajulie said…
Interesting impressions you've shared -- I haven't traveled abroad a great deal, but even domestically, I find that the hype of magazines and websites is often not the case at all in real life (just as you described with congestion and prices).

Barbara Anne said…
How interesting! I love the photos and appreciate the educational addendums (like KA-pri).

It is simply wonderful that Joe sketched many of the sights to keep forever. Might you and he have some of those sketches framed for your home - or copied and framed if you wish to keep the sketchbook intact?