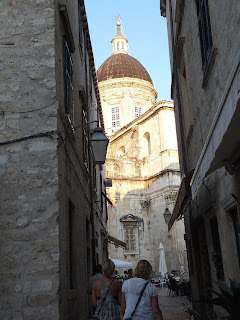 The next day found us in Dubrovnik, the largest city we visited in Croatia. Interestingly, while Croatia very recently joined the European Union, the country wasn't "on the Euro" at the time we visited. Their currency is the kuna, and in Hvar and Rovinj we had to go to bank machines to acquire kuna if we wanted to make any purchases. Since every port involved our sitting at some point in the shade with a cold glass of lemonade, we acquired some kuna.

Croatia is known for lavender, truffles, and olive oil (among other things) and we bought some of each. In Dubrovnik, merchants weren't nearly as picky about currency. They accepted kuna, Euros, and even American dollars! One purchase I made near the end of our stay involved a combination of currencies, obligingly calculated by the shopkeeper. 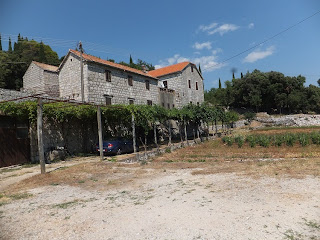 In Dubrovnik, we had signed up to participate in a shore excursion offered by Royal Clipper. In an air-conditioned (!) bus, we traveled out through beautiful countryside to visit a home that had existed for hundreds of years. There was a vineyard, an olive grove, and a huge garden.

We had a tour of the working parts of the home, and were shown where and how olive oil was made. After that we were treated to a sample of a beverage produced by the home vineyard. It was not to our taste! Members of the family dressed in traditional Croatian garb were selling embroidered blouses and table linens.

On the way back to Dubrovnik, we stopped at a smaller town and wandered around. A couple of young girls from our group found a beach and returned to the bus with wet hair and huge smiles!

While our guide was showing us the downtown area, a commotion was heard and a large group of people were making their way toward us, the front one carrying a flag and all of the men singing! What could it be?

Our guide told us that it was a wedding party. The men had gathered at the home of the groom at about two o'clock and after partying there for some time, they processed to the bride's home where a similar party was taking place! 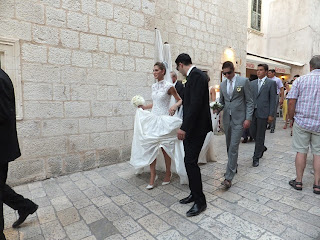 And look! Here comes the bride! The entire group then went into the church for a very brief ceremony and then returned outside for more celebrating in the streets! A fancy automobile, decorated, was at one end of the plaza and after dancing and singing for a bit, off went the bride and groom and the rest of the guests went off to eat at a nearby restaurant.

In the interest of full disclosure, this bride isn't married to the man in the group pictured above. She is from a second exciting wedding procession that we heard while eating dinner. 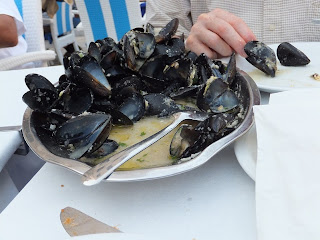 Dinner? Well, yes. We had heard about a wonderful local specialty of grilled squid and we wanted to try it. Alas, none of the restaurants on the square had this dish, but by that time we had pretty much decided that we'd skip the elegant shipboard dinner for something local. Local meant fish and seafood, and that was just fine with us. I have a shellfish allergy, but can eat squid and octopus. And I sampled fried calamari in several countries.

Joe ordered mussels and the portion that they brought him was huge!

Barbara Anne said…
Marvelous, just marvelous!!! Did you purchase any of the embroidered table linens?

I'll pass on the squid and octopus, thank you.

You do like to tease us by withholding hints to your next destination, don't you?! I'll play along!