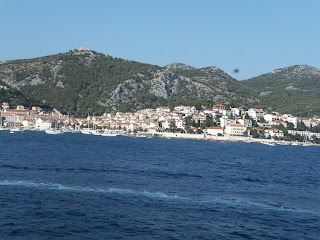 The next day found us anchoring just outside Hvar, Croatia, a lovely view to behold. Royal Clipper, for the most part, would anchor outside the harbors of these little ports, and would provide tender service to take us ashore. The tenders usually ran every half hour.

Hvar was a small place, but very pretty. Some folks from the ship took excursions that involved kayaking or bicycling. We chose to explore on our own.  The "downtown" area was small and -- for once -- the church wasn't at the top of a hill! 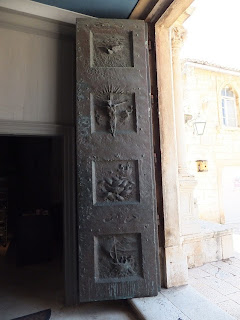 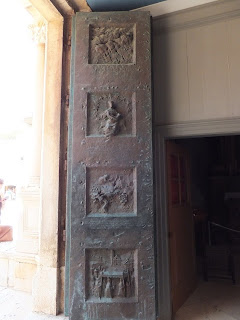 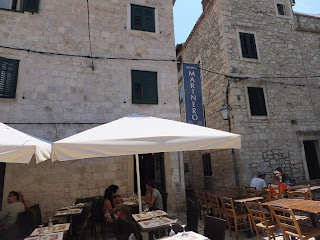 Most of the ports we visited featured a downtown square and not a lot of trees. As mentioned earlier, the sun was powerful. For the first half of the day, the cafes on the shady side of the square would be open and then midway through the day, as the sun moved, they would close and the ones on the opposite side would open. It was a fine system. Of course there were umbrellas and awnings and tent-like canopies. Some cafes had misting fans that were just delightful and at least one place had the misters built into the umbrella spokes.

Barbara Anne said…
How wonderful to visit places off the beaten tourist path!

Love the practical system of using the intense sunshine as a timetable of when to open and close shops. Why can's more situations be solved so sensibly?

Janet O. said…
Fascinating about the cafes being open based on the sun position. Misting fans sound refreshing!

Quiltdivajulie said…
I've just now caught up with your travel posts . . . what absolutely wonderful photos. I can only imagine the memories you brought home!
Wednesday, August 21, 2013 5:08:00 PM