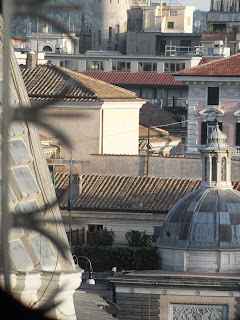 Our hotel in Rome was small, with only thirty-five rooms. It boasted a beautiful breakfast room as well as a rooftop garden.

One morning we went up to the garden and looked out at Rome from that vantage point. I was interested in the assortment of rooftops.

We were only about a block from Piazza del Popolo, a location Joe had requested because of his fondness for the twin churches there. We did go into the one on the left, but the one on the right was closed for repairs. We ate all of our dinners in our "neighborhood," enjoying traditional Italian fare.

I'm a huge fan of risotto and had looked forward to eating pretty much of it in Italy. However, at every restaurant we visited in Venice, the only risotto came with shellfish, and I am allergic. Sadly, we found the same to be the case in Rome, until the very last day when we stopped for lunch at a cafe on Piazza Navona, where I enjoyed some absolutely delicious mushroom risotto! 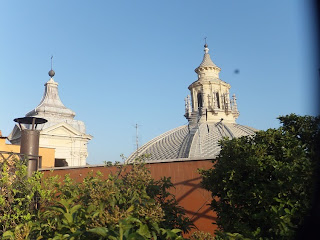 Friends have asked me about the food on the ship and ashore. Knowing that this trip was a one-time thing, I abandoned my Weight Watcher program for 16 days during which time I enjoyed everything I wanted. The food on the ship was excellent, and the local calamari, pasta, bellinis, gelati, were superb. In 16 days I gained 1/4 pound! This, of course, is attributed to the tremendous amount of walking and climbing that we did on the trip. I had begun my walking program in May, starting with a daily goal of 7000 steps and gradually increasing until I was at 10,000 steps when we arrived in Venice. Most nights when I checked in with my FitBit, I was surprised to find I had walked far more than 12,000 steps! 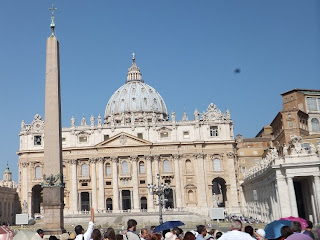 Our last day in Rome arrived. Having been in the city some thirteen years before, we had already visited the Spanish Steps, the Sistine Chapel, the Coliseum (ya, Honna, it looks just like the pictures!), the baths, and all of the other important sites and sights in Rome. On Helen's behalf, we had checked in at the Trevi Fountain and couldn't get within touching distance due to the crowds. We decided that the best use of our morning was to go to St. Peter's. We hadn't heard from the Pope that he wanted to get together, but we thought we would take the chance of running into him and perhaps get a gelato and solve world problems together. 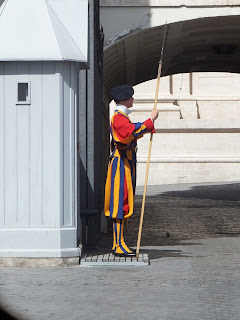 When we got to St. Peter's, there was the long line we had expected. What we had not expected was how quickly it would move! We were just ahead of a large group with a guide and just behind a young Asian woman (seemed like high school age to us, but what do we know?) with a camera. Not speaking each others' languages was no obstacle as we made a pleasant connection with her, mutually pointing out things of interest and taking photographs of each other. We fantasized that when she got home she may have told her family, "I met the nicest older couple at St. Peter's . . . ."

St. Peter's wasn't as crowded inside as it had been in 2000 when we visited, which was surprising. We wandered around at leisure, discovering a panel inscribed with the names of all of the Popes, photographing statues and ceilings. There was a mass going on in a side chapel and we slipped in to sit in a back pew to rest our feet for a bit. It didn't matter that we were Lutheran and the service was Catholic nor did it matter that we spoke English and they were speaking Italian. We understood what was going on. After the sharing of the Peace, out came the usher with his long-handled basket; he didn't care either that we were English-speaking Lutherans, and passed it in front of us. We were happy to put some Euros inside. 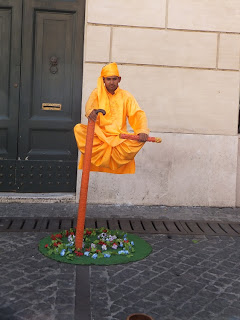 Piazza Novona, our final destination, was a fair distance away. We walked for a while, passing yet another of those wonderful street artist-performers, stopping in a cafe for a cold drink.

We carried water bottles with us everywhere throughout our trip, but foot tiredness and biological issues necessitated that we stop at cafes periodically. In Italy the first time we requested a lemonade, we were offered a lemon soda and liked it so much! Far less sweet than 7-Up, lemon soda was almost like a carbonated lemonade, and it became one of our standard beverages. We are also big consumers of iced tea, and were surprised that everywhere we went on our trip, iced tea wasn't brewed fresh but came in 8-ounce bottles and in two flavors: lemon and peach.

So we come to the end of a wonderful trip, arriving home tired but content, laden with receipts, Christmas gifts and a few trinkets for our neighbors.

There may be one more post on the trip. Joe will scan some of his sketches into the computer for me to share with anyone interested.

Janet O. said…
This has been such an incredible journey, Nancy, and I have been happy to live it vicariously--probably the only way I ever will. Though we may be going to Ireland next year!!
I loved your account of your experiences, dotted with your wry humor. : )
Would LOVE to see Joe's sketches!
Saturday, August 31, 2013 11:47:00 AM

Barbara Anne said…
This trip was absolutely glorious, start to finish!! Applause for the brilliant research and planning before departure and the excellent photos! I look forward to seeing some of Joe's sketches.

Cheers for the excellent foods you enjoyed and your miniscule weight gain. Good decision to ignore your diet for the duration of the trip, too. Well done!

Unknown said…
What a wonderful trip you've had and of all the fabulous places you've visited I've only been to Venice - you have whetted my already hungry appetite to visit the others sometime in the future - thanks for taking to time and energy to share it all with us (and very well done to you on not gaining any weight with all the delightful food on offer)
Saturday, August 31, 2013 2:58:00 PM

cityquilter grace said…
nancy, thank you so much for the wonderful summer "trip" to italy and all the lovely sights and sidebars....
Sunday, September 01, 2013 7:06:00 AM

AnnieO said…
You're such a good writer and I so enjoy all your descriptions of the sights, sounds, people, food, and joy you bring to your travels! Thank you so much.
Sunday, September 01, 2013 6:39:00 PM

Sarah said…
I have loved following your trip. It made me feel like I was really there. Sorry I'm so late in commenting on your post. Big backlog in my reader!
Thursday, September 12, 2013 10:02:00 AM