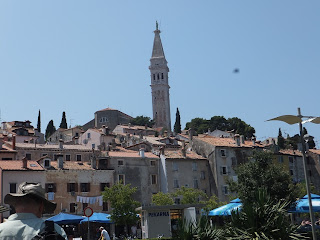 When I did the research on Rovinj, Croatia, THE main attraction was the church of St. Euphemia. A young Christian woman, martyred in 307, her miracle at Chalcedon, I think, needs to be taken with several grains of salt. But who am I to judge? If St. Euphemia was the major thing to see in Rovinj, I knew I was going to see it, come hell or high water. 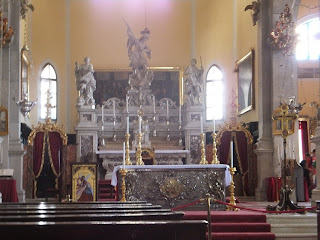 As it happened, neither hell nor high water came, but the temperature in Rovinj was much closer to the former than the latter. And the church, of course, was situated at the top of a hill. The climb up was strenuous, but the way was patterned with charming shops as well as vistas down to the sea, and we trudged upward, water bottles in tow.

Here is the front of the church. The main principle of interior design, it would seem, is "If some is good, more is far better." 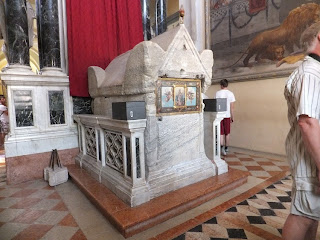 Behind the altar was another chamber telling Euphemia's story, how she was tormented by Diocletian and ultimately martyred in an arena.

Encased in stone are some relics of the saint.

When we were making our way down that hill, away from the church, we encountered a fellow shipmate climbing up. "Is it worth it?" she asked me. "Yes," I told her. If only for the windows. I've never seen anything like them."


It turned out that the little booth in the church that sold souvenirs and charged for the optional climb into the tower (are you kidding?) had been so successful in raising money that the pastor decided to hire an artist to do a new window. It was beautiful, and over the years, as sufficient funds would accumulate, additional windows would be commissioned by the same artist. And here are three of them. 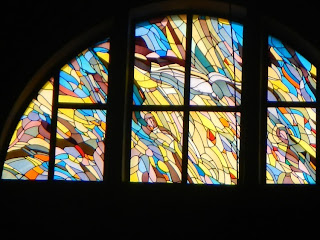 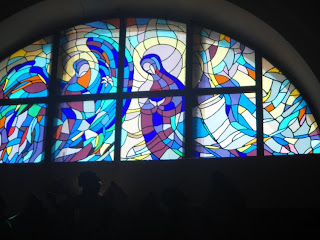 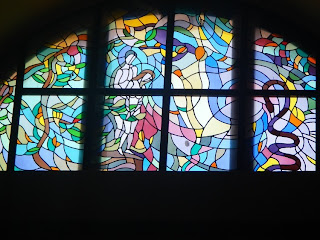 Janet O. said…
Definitely an ornate interior! The windows are impressive!
So the street performer collects money for standing still? What a concept. : )
Tuesday, August 13, 2013 10:08:00 AM

DH's father was an architect, so most of the vacation photos have only buildings or parts of buildings in them. Went with that territory. He didn't like people very much.

LizA. said…
What an interesting town. The windows are just beautiful. Love the pic of the view between buildings while climbing. As for the street performer, I really thought he was a statue...wow.
Thursday, August 15, 2013 3:32:00 PM