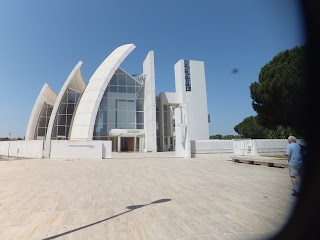 Our second day in Rome was one of my favorites of our whole trip. Long ago Joe had heard about Chiesa di Dio Padre Misericordioso (Italian for Church of God the Merciful Father), commissioned in 2000 by Pope John Paul II as part of the Jubilee. The Pope wanted this magnificent church to be built in a rather poor neighborhood, Tor Tre Teste; it includes a large community center and serves 8000 residents. Designed to resemble a boat, in particular the apostle Peter's boat, it somehow connected with the five-masted tall ship that had been our home for ten days. This church, of course, is very different from the many, many other churches we had visited on our trip. 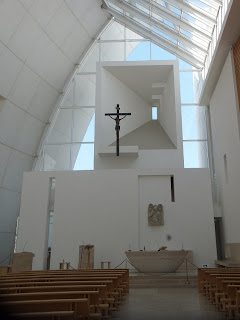 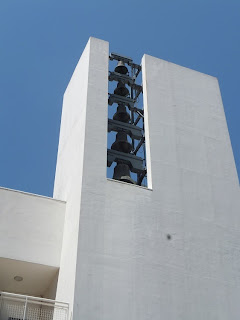 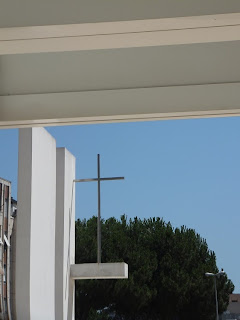 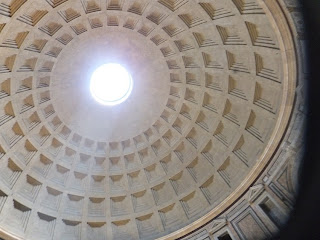 From the newest church in Rome, we went back downtown and visited the oldest place of worship, the Pantheon! Initially built in 31 B.C. to honor all of the gods of ancient Rome, it was rebuilt in 126 A.D. by them Emperor Hadrian (remember him and his villa from yesterday's post?). In Medieval times, the building was saved from certain destruction by the Roman Catholic church who modified it into a Christian place of worship.

It is one of my favorite buildings in Rome. 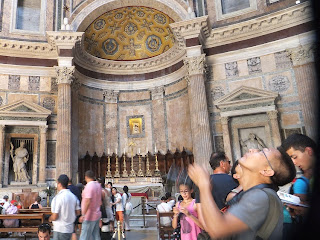 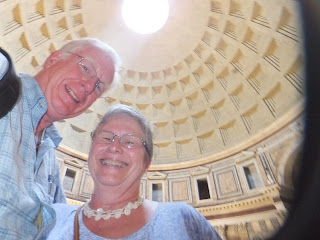 Barbara Anne said…
How lovely in its simplicity is Chlesa di Dio Padre Misericordioso! It is certainly quite different to the many older churches we've seen.

Nice to see your smiling faces, too!

Sarah said…
The church is similar in shape to the Sydney Opera House, which is based on ships sails, interestingly. It's nice to see you in a pic, to finally "meet" you!
Wednesday, September 04, 2013 10:17:00 AM